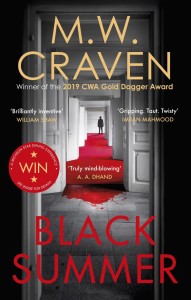 Jared Keaton, chef to the stars. Charming. Charismatic. Psychopath . . . He’s currently serving a life sentence for the brutal murder of his daughter, Elizabeth. Her body was never found and Keaton was convicted largely on the testimony of Detective Sergeant Washington Poe.

So when a young woman staggers into a remote police station with irrefutable evidence that she is Elizabeth Keaton, Poe finds himself on the wrong end of an investigation, one that could cost him much more than his career.

Helped by the only person he trusts, the brilliant but socially awkward Tilly Bradshaw, Poe races to answer the only question that matters: how can someone be both dead and alive at the same time?

And then Elizabeth goes missing again – and all paths of investigation lead back to Poe.

Jared Keaton was convicted of killing his daughter Elizabeth. Washington Poe is convinced Keaton is a psychopath, that he murdered Elizabeth six years ago, despite her body never being found. But then Elizabeth walks into a police station and sets in a motion a chain of events that finds Poe re-investigating what really happened over half a decade ago. Then Elizabeth disappears and Poe finds the focus of suspicion turn from Keaton to himself.

I’ll admit I was a bit wary when I started to read this book. Storylines that involve the lead character being set up as the culprit are one of my least favourite narratives. I shouldn’t have worried with Black Summer.

Poe and Bradshaw are fast becoming my favourite crime fighting duo. The two wildly differing characters work so well together. Poe himself states in the book that they shouldn’t really be friends but it works. Poe tries to help Tilly be more socially aware, gently guiding her as to what is suitable to be said, especially to their boss, DI Stephanie Flynn. Tilly helps Poe look at the world in a different way. She might talk at him a lot (he’s woken up finding her still talking to him), but what she says does sink in and often reemerges in his memory when the investigation needs it most. The relationship between Poe, Bradshaw and Flynn is also a joy to read. Black Summer sees them working together in a tight, time sensitive way, that shows the complete trust between the three.

In The Puppet Show one of the things I loved where the lines of dark humour littered throughout the book. That humour was just as welcome and thankfully found in Black Summer. Poe’s acerbic wit and Tilly’s inadvertent social faux pas add a lightness to a story which is anything but light.

The author has a the capacity to make the reader love or loath a character in a few words. When Jared Keaton appears on the page the scene is soon set, simply and without fanfare. The simple act of eating a meal show the psychopathy clearly for all to see.  Cumbria is very much a character in the novel. The setting, the beautiful countryside, small crofts, picturesque villages all juxtapose against the horrors of the investigation.

This is a tightly written, driven, narrative. There were no points in the story where my attention waned. The pace is completely right and the plot never drags. It does, if anything, fly by, the pages virtually turning themselves. The clues are dotted throughout the novel, a breadcrumb trail left for the reader to find so that they can work out what has happened as Poe does. How can Poe work his way around irrefutable DNA evidence? What really happened that night six years ago? These are all questions that make the story all the more compelling.

Black Summer sees the very welcome return of Poe, Tilly and company. I only hope the wait for their next adventure is not as long.