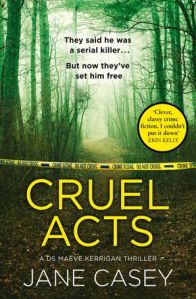 Guilty?
A year ago, Leo Stone was convicted of murdering two women and sentenced to life in prison. Now he’s been freed on a technicality, and he’s protesting his innocence.

Not guilty?
DS Maeve Kerrigan and DI Josh Derwent are determined to put Stone back behind bars where he belongs, but the more Maeve digs, the less convinced she is that he did it.

The wrong decision could be deadly…
Then another woman disappears in similar circumstances. Is there a copycat killer, or have they been wrong about Stone from the start?

Released on a technicality, Leo Stone is free, after spending a year in prison for the murder of two women. DS Maeve Kerrigan and DI Josh Derwent are tasked with reinvestigating the murders to ensure the evidence is air tight, and that Stone won’t be released a second time. But as Kerrigan delves further into the past she becomes less and less sure that Stone is the one who carried out the terrible crimes. And then another woman goes missing and it’s a race against time to find her before it’s too late.

I have to admit I haven’t read all of the Kerrigan series, much to my regret. However, the fact that I had not followed Maeve’s journey from the beginning did not spoil my enjoyment. If you aren’t a completionist then you don’t have to worry about not reading the series from the start. If you are, then you have seven books to enjoy before you get to Cruel Acts.

The feeling I got from the outset was how real the story felt. Yes is it fiction, so parts will be idealised. In my long distant past I worked as a criminal solicitor. Cruel Acts reminded me of a case I worked on, despite being completely different. There was something that just jelled. I think that made the story all the more impacting. The reader feels for the victims and their families, depicted here in such a light that we see them as victims also. Revisiting murders from the past shows how those left behind have to continue with such a gap in their lives. Because Kerrigan has to re-investigate the murders the victims become much more central characters in the novel. They are the focus for Kerrigan and so are the focus for the reader, as we hear about the women when they were alive, rather than being a prop to propel the narrative.

Derwent and Kerrigan make a delightful pair, well a delightful pair for the reader in any event. Whether Derwent would be so delightful if you had to work with him is another matter.  The pair provide a dark humour that continues throughout the book, showing a work relationship both fraught with tension and shot through with friendship, though perhaps someone strained at times. The story is made all the more compelling because of the characters. The way the two bounce off each other, and come together to work when it counts was a pleasure to read. There are the supporting cast who all help round out the story and who will hopefully follow on into future books.

Whilst I had figured out the denouement  before the reveal this did not distract from my enjoyment of the novel. I found myself speeding through the pages and regretfully turning the last page. There is nothing I love more than a good crime series, and though I haven’t read all of the Kerrigan books, from what I’ve read I can tell this is a good crime series, albeit that I’ve arrived late to the party.

In a word: Brilliant.  I am eagerly and impatiently awaiting the next Kerrigan book.