My to be read pile (alright, stronghold) is big enough to build a fort with (no honestly I know it is because I have built a book fort with it). It obviously doesn’t stop me from adding to it regularly or visiting the library for a temporary rehoming of books, because a world without books is not a world I want to contemplate.

So this time the old book is The Other Half of My Heart by Stephanie Butland, published by Black Swan on 22 October 2015.

“It smelled bittersweetly of sourdough, and there was the trace of hot, fresh bread in the air. She took a deep breath and unlocked the door”

Fifteen years ago Bettina May’s life’s veered off course in one disastrous night. Still reeling from the shock of losing everything she thought was hers, Bettina opens a bakery in a village and throws herself into the comfort of bread-making.

She spends her days kneading dough and measuring ingredients. She meets someone. She begins to heal.

Until someone who knows what happens that night walks into Bettina’s bakery. In the pause of a heartbeat, fifteen years disappear and Bettina remembers a time she thought was lost for ever . . .

Can she ever go back?

Recently welcomed to the Emson clan is A Good Man by Ani Katz, published by William Heinemann on 16 January 2020.

‘Our lives were good – great, even. We were happy and secure. We had everything we needed. There was no way for anyone to know – least of all me – that it would all end the way it did.’

Thomas Martin is everything a man is supposed to be. He has a beautiful wife and a loving daughter, a good house on Long Island, a flourishing career at a prestigious Manhattan advertising firm. He’s a good son and brother, taking it upon himself to support his ailing mother and adult sisters. He knows it’s his God-given duty to shield them, his girls, from the everyday horrors of the world.

But he has failed, and unspeakable tragedy has befallen his family.

Now, Thomas struggles to come to terms with what has become of his life. If only he can tell the story as he saw it, he believes he might find out how and why things unravelled so horribly; how he failed so disastrously.

Because Thomas Martin is a good man.

Borrowed from the library this time is The Perplexing Theft of the Jewel in the Crown by Vaseem Khan, published by Mulholland on 5 May 2016.

For centuries the Koh-i-Noor diamond has set man against man and king against king.

Now part of the British Crown Jewels, the priceless gem is a prize that many have killed to possess.

So when the Crown Jewels go on display in Mumbai, security is everyone’s principal concern. And yet, on the very day Inspector Chopra visits the exhibition, the diamond is stolen from under his nose.

The heist was daring and seemingly impossible. The hunt is on for the culprits. But it soon becomes clear that only one man – and his elephant – can possibly crack this case…

And finally, the blue book plucked from the TBR shelves is How to Make a Friend by Fleur Smithwick, published by Black Swan on 8 October 2015. 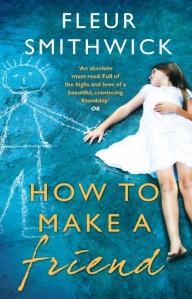 Have you ever thought someone was watching you . . . but there was no one there?

One summer’s evening, Alice sees something out of the corner of her eye. She turns to look: just a trick of the light. She is no longer the lonely little girl she once was, with her games of make-believe and imaginary friend, Sam.

Then Alice’s world is shattered in a tragic accident, and Sam creeps out of the shadows and back into her life. At first Alice is comforted by his presence: a best friend to help fill the void in her heart. Perhaps even help her find someone real to share her life with.

But Alice and Sam know he can only exist if she wants him there. So when Alice decides it’s time for him to leave, who will get hurt in order for him to stay alive?