His Honour Judge Paul Worsley QC is a former Judge and Barrister. He both prosecuted and defended criminal cases, including the successful prosecution of Wearside Jack, who had pretended to be the Yorkshire Ripper. He later went on to sit as a Judge and heard cases at the Old Bailey.   His book, The Postcard Murder: A Judge’s Tale, is published by Pilot Productions on 14 November 2019.

Paul kindly answered a few of my questions.

1. Tell us a little about The Postcard Murder: A Judge’s Tale.

The book tells of the murder (by virtual decapitation) of 22-year-old Emily Shaw in the Camden Town flat she shared with Bert Shaw, a man neighbours knew as Emily’s husband and who worked as a cook on the Midland Railway out of St Pancras Station, frequently spending nights away.

The Judge, Mr Justice Grantham, tells the story from his point of view, drawing verbatim on what was said at the time and also (uniquely) on the author Paul Worsley QC’s experience of what goes through the mind of a Judge at a murder trial in Court No. 1 at the Old Bailey.

Set in 1907, the story is recounted four years after the verdict by Grantham in conversation with his son, William (a barrister by profession), in the setting of the Athenaeum – a literary device which enables a long-awaited solution to this famously unresolved case.

2. When writing about Emily’s case, did you start from your viewpoint as a judge or as a writer?

I started from the viewpoint of the Judge – who after all is to tell the tale.

3. Of all the past crimes, why this one? What was it that made it stand out?

It was a murder case tried in Court 1 at the Old Bailey where I have sat trying murders. It was a whodunit and unusually a case where the Judge changed his mind during the summing up to the jury!

4. What research did you have to do and how important was it to stay true to the time period and the case?

Off to the National Archives at Kew to read the trial transcripts. It was essential to retain the feeling of the period as the Judge is telling the tale to his son in 1911.

5. Having been through the publishing process is there anything about the process of creating the book that surprised you?

The time and cost involved in designing the cover, setting out the chapters, finding the photos, printing it and then getting PR to help raise the profile of the book.

I read whodunits – especially by Peter James. I play bridge to keep the brain going, croquet to keep (not very) fit, collect Vanity Fair prints and walk the dog.

How do you breed peacocks in cold North Yorkshire? Keep persevering! 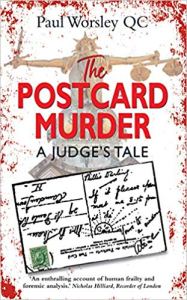 It may be of some satisfaction to you, Gentlemen of the Jury, to know that you have been engaged in one of the most remarkable trials that is to be found in the annals of the Criminal Courts of England. Mr Justice Grantham, Judge at the Old Bailey

This is a vintage whodunit set in Edwardian London at a crossroads in time, as social revolution and psychiatry posed new questions for the Law and for the first time the Media were co-opted to run a killer to ground.

The year is 1907: 22-year-old Emily Dimmock lies murdered in her Camden Town flat, her head all but severed from her body. With not a thread or stain or fingerprint to point to the perpetrator, a young artist is manoeuvred into the shadow of the scaffold.

The tale is told verbatim by witnesses presided over by the author, who draws on his own experience as a Judge at the Old Bailey to get inside the mind of the outspoken but irresolute Mr Justice Grantham. The result is as compelling today as it is definitive of the era in which the murder was committed.

The book is illustrated with two maps and 27 photographs, 10 of which are in full colour.