My to be read pile (ok, stacks), could be said by some to be on the verge of being declared a hazard zone. It obviously doesn’t stop me from adding to it regularly or visiting the library for a temporary rehoming of books, because sometimes it would simply be rude not to. 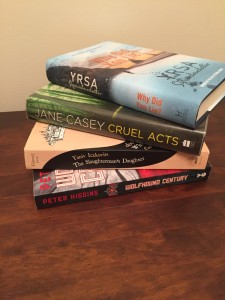 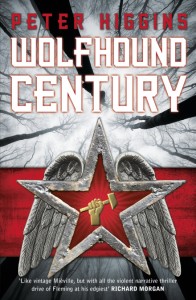 So for something old we have Wolfhound Century by Peter Higgins, published by Gollancz on 9 January 2014.

A thousand miles east of Mirgorod, the great capital city of the Vlast, deep in the ancient forest, lies the most recent fallen angel, its vast stone form half-buried and fused into the rock by the violence of impact. As its dark energy leeches into the crash site, so a circle of death expands around it, slowly – inexorably – killing everything it touches. Alone in the wilderness, it reaches out with its mind.

The endless forest and its antique folk lore are no concern to Inspector Vissarion Lom, summoned to the capital in order to catch a terrorist – and ordered to report directly to the head of the secret police. A totalitarian state, worn down by an endless war, must be seen to crush home-grown terrorism with an iron fist. But Lom discovers Mirgorod to be more corrupted than he imagined: a murky world of secret police and revolutionaries, cabaret clubs and doomed artists. Lom has been chosen because he is an outsider, not involved in the struggle for power within the party. And because of the sliver of angel stone implanted in his head at the children’s home.

Lom’s investigation reveals a conspiracy that extends to the top echelons of the party. When he exposes who – or rather what – is the controlling intelligence behind this, it is time for the detective to change sides. Pursued by rogue police agents and their man-crushing mudjhik, Lom must protect Kantor’s step-daughter Maroussia, who has discovered what is hidden beneath police headquarters: a secret so ancient that only the forest remembers. As they try to escape the capital and flee down river, elemental forces are gathering. The earth itself is on the move. 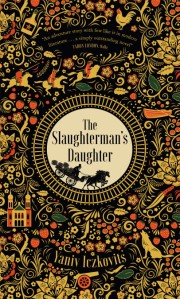 The new book this time is The Slaughterman’s Daughter by Yaniv Iczkovits, published by MacLehose on 20 February 2020.

The townsfolk of Motal, a small town in the Pale of Settlement where nothing extraordinary ever happens, are shocked when Fanny Keismann – devoted wife, mother of five and celebrated cheese farmer – leaves her home at two hours past midnight and vanishes into the night.

True, the husbands of Motal have been vanishing for years, but a wife and mother? Whoever heard of such a thing. What on earth possessed her?

Could it have anything to do with Fanny’s missing brother-in-law, who left her sister almost a year ago and ran away to Minsk, abandoning his family to destitution and despair?

Or could Fanny have been lured away by Zizek Breshov, the mysterious ferryman on the Yaselda river, who, in a strange twist of events, seems to have disappeared on the same night?

Surely there can be no link between Fanny and the peculiar roadside murder on the way to Telekhany, which has left Colonel Piotr Novak, head of the Russian secret police, scratching his head. Surely that could have nothing to do with Fanny Keismann, whatever her past, whatever her reputation as a wilde chayeh, a wild beast . . .

The book borrowed from the libary this week is Cruel Acts by Jane Casey, published by Harper Collins on 18 April 2019.

How can you spot a murderer?

Leo Stone is a ruthless killer – or the victim of a miscarriage of justice. A year ago, he was convicted of the murder of two women and sentenced to life in prison. But now he’s free, and according to him, he’s innocent.

DS Maeve Kerrigan and DI Josh Derwent are determined to put Stone back behind bars where he belongs, but the more Maeve finds out, the less convinced she is of his guilt.

Then another woman disappears in similar circumstances. Is there a copycat killer, or have they been wrong about Stone from the start?

And finally the book with a blue cover this time is Why Did You Lie? by Ysra Sigurdardottir, published by Hodder & Stoughton on 11 August 2016.

A journalist on the track of an old case attempts suicide.

An ordinary couple return from a house swap in the states to find their home in disarray and their guests seemingly missing.

Four strangers struggle to find shelter on a windswept spike of rock in the middle of a raging sea.

They have one thing in common: they all lied.

And someone is determined to punish them…