Published by John Murray (Soho Crime in the US) 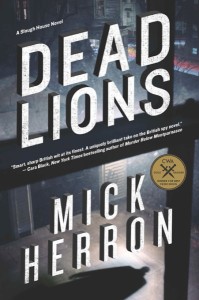 Dickie Bow is not an obvious target for assassination.

But once a spook, always a spook. And Dickie was a talented streetwalker back in the day, before he turned up dead on a bus. A shadow. Good at following people, bringing home their secrets.

Dickie was in Berlin with Jackson Lamb. Now Lamb’s got his phone, and on it the last secret Dickie ever told, and reason to believe an old-time Moscow-style op is being run in the Service’s back-yard.

In the Intelligence Service purgatory that is Slough House, Jackson Lamb’s crew of back-office no-hopers is about to go live . . .

An old man dies on a rail replacement bus. Nothing suspicious about that, expect this old man was an old spook. A spook who worked with Jackson Lamb and the only spook said to have seen the elusive Popov, a bogyman supposedly made up by the Soviet Union as a diversion tactic. Lamb knows there is more to the death of Dickie Bow than meets the eye. Luckily, he has an office full of assets who are just ripe for an investigation the big shots at Regents Park don’t want investigating.

I read the US version of the novel and it surprised me to see that they refer to the books as the River Cartwright series, whilst in the UK it is the Jackson Lamb series. And yes, whilst River Cartwright appears frequently, this is still very much an ensemble novel, all of the characters get equal footing, though perhaps Jackson Lamb leaves the biggest footprints.

Uncouth, undesirable and unzipped, Jackson Lamb is still as deliciously horrid as ever. The reader perhaps gains a little more understand of that unwashed enigma. He does, deep down, have some semblance of care for his employees, though that may be driven by the fact he can’t be bothered to remember a new name so frequently. He knows that whilst the Park may think they are all screw ups, the slow horses in his stables aren’t put out to pasture just yet.

Slow Horses established the rag tag bunch of misfits, miscreants and misunderstood, introducing the reader, or this reader at least, to a joyfully dislikeable group of people. So big are the chips on their shoulders it’s a surprise they don’t all walk with a stoop. There’s River Cartwright, still seething from the betrayal that saw him banished. Louisa Guy and Min Harper, keen for a way out, but wondering if they would betray the other to do so. Roddy Ho, so sociopathic other sociopaths would use him as a how not to guide. Catherine Standish is the most sensible of the bunch. Here she is seen to know much more that goes on than she makes out. Jackson Lamb would drive her to drink if that wasn’t the reason why she was in Slough House. Two new slow horses have been stabled at Slough House. Newcomers Shirley Dander and Marcus Longbridge circle each other like lions. Smarting from being banished, the raw anger is not yet dulled, and both are looking for the emergency exit back to Regents Park. Slowly the group work together to discover more about the Russian enigma and why his name has emerged so many years later.

So when it looks like an old Moscow mule has come out of retirement, and is not planning to go quietly into the night, Lamb and his motley crew start to look into the tale of Popov and the arrival of a new big shot oligarch who Spider Webb, River’s arch enemy at Regent’s Park, wants to net as a future resource.

This second instalment of the series is funnier, darker and more impacting than the last. It is a testament to the author that the reader comes to know these undesirable characters so quickly. They soon become entrenched and almost endearing, almost. It much more than it is just much more fun to dislike them all intensely. Lamb’s dark humour lessens his behaviour to a level where the reader wants to read about him but are rather glad they don’t have to work for him. There are some wonderful lines in the novel, almost poetical, and they make the reader stop and take note. Mick Herron is not afraid of shaking things up so early on in the series and such a shakeup alters the dynamic of the group yet again and leaves the reader on their toes, wondering what will happen to the group they have come to love to hate.

Another fabulous outing for the slow horse, I’m looking forward to the next visit to the glue factory.