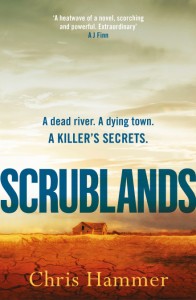 In an isolated country town ravaged by drought, a charismatic young priest opens fire on his congregation, killing five men before being shot dead himself.

A year later, journalist Martin Scarsden arrives in Riversend to write a feature on the anniversary of the tragedy. But the stories he hears from the locals don’t fit with the accepted version of events.

Just as Martin believes he is making headway, a shocking discovery rocks the town. The bodies of two backpackers – missing since the time of the massacre – are found in the scrublands. The media descends on Riversend and Martin is the one in the spotlight.

Wrestling with his own demons, Martin finds himself risking everything to uncover a truth that becomes more complex with every twist. But there are powerful forces determined to stop him, and he has no idea how far they will go to make sure the town’s secrets stay buried.

One morning a town priest walks out of church and shoots five of the gathering congregation dead before being shot and killed. On the anniversary of the shooting Martin Scarsden visits the town to write a story about how Riversend has coped 12 months later. He finds a town conflicted as to the events. And then two bodies are found and Martin is placed firmly in the spotlight. Now he has to figure out what really happened in the town.

A town struggling as a drought continues to rage. Still coming to terms with a mass shooting its residents are not receptive to Martin, who seemingly wants to stir it up again. But there are people who emerge, telling a different side to the official version of events. This story opens with Martin arriving in a seemingly deserted ghost town and the oppressive and secretive air continues throughout the book.

There is the sense that the town is clinging on to survival, and not just because of the shooting. Shops are either closed down or only open part of the week. There’s nothing for the teenagers of town to do other than drive around. Byron Swift, the priest, brought life to the town and destroyed more than 5 lives when he went on his shooting spree. The town is living under the weight of secrets, both those known by some of the residents and those Swift took with him to his grave.

There is a strong sense of claustrophobia about Riversend, despite the fact that it is in the wide-open space of the Australian interior. The heat is oppressive, it’s description radiates from the page. People have learned to survive the harsh elements, to accommodate the environment into their everyday lives.

As for the characters there are whole host of people who seem trustworthy but aren’t or conversely seem a little bit duplicitous but are not as they seem. There are people keeping their own secrets, those trying to protect others and those just trying to survive. Some are nicer than others, some the reader can take an instant dislike to, such are the depictions.  Martin is dealing with a trauma from his own past and the story at Riversend end is supposed to be his way back to normality. It might just be the end of his career.

Gradually Martin chips away at the exterior of Riversend, aided by those who may have an ulterior motive. There are lies hiding other lies and as such the reader is never sure just who to believe.

Scrublands has been opted for TV and it’s easy to see why. The narrative is such that it would be ripe for depiction on screen.

An intriguing and entertaining tale. I look forward to reading more from Chris Hammer in the future.