Hilary Bonner is the author of over 15 novels including Wheel of Fire, Death Comes First, A Moment of Madness and When the Dead Cry Out. Her latest novel, Deadly Dance is published by Blackthorn Books on 3 October 2019.

Today Hilary talks about the story behind DI Vogel.

John Lennon said life is what happens while you are making other plans. Much the same applies to my series detective David Vogel, the somewhat beleaguered hero of Deadly Dance. He seemed to evolve all by himself whilst I was busying myself with other writing matters entirely.

I knew from the beginning that I wanted DI Vogel to be different sort of copper. I sought the antithesis of other fictional detectives.

But I do not remember ever deliberately working on building his character.

Instead this tall thin man with a slight stoop and bad eye-sight, resembling a professional academic or a clergyman rather more than a policeman, wormed his way almost insidiously onto my blank screen. With the deceptively unobtrusive persistence which was to become so familiar, a near fully-formed Vogel arrived somewhat unexpectedly and with quiet vengeance.

He is a secular Jew, clever and diffident of manner, who, whilst always respectful of people of faith, finds any religious belief hard to understand.

He becomes ill at ease in the presence of overtly expressed emotion. He cannot always prevent himself displaying

embarrassment, which causes him to blink rapidly and involuntarily behind his spectacles.

He is often more content in the company of his computer than interacting with other human beings.

Unlike most fictional detectives he is happily married and tee total. He is also vegetarian.

He bares little resemblance to anyone I have ever met. Certainly not the assorted police officers who over the years have so kindly given me invaluable help with my books. And he has next to nothing in common, either, with me, except perhaps a love of backgammon and crosswords – although DI Vogel compiles crosswords whilst I merely struggle to complete them.

Vogel is a city boy, a real Londoner, who quit the Met and re-located to Bristol and the Avon and Somerset police force for the sake of his disabled teenage daughter. To him anywhere outside of greater London is the sticks, and he remains singularly unimpressed by the British countryside which he regards as being full of mud and dripping green stuff.

I live partly in London but mostly in rural Somerset and I love the countryside. I am not teetotal, and I am not vegetarian. I have to admit that the very thought of giving up alcohol fills me with mild horror – although in recent years I have begun to sometimes question the concept of eating meat, something which, as the daughter of a butcher, I never thought would happen. Maybe that is what subconsciously led me to Vogel’s vegetarianism.

By and large, it genuinely feels that I was not consciously involved to any great extent in the birth and development of my newest detective.

Vogel is a skilled manipulator of people. And I fear the person he has manipulated most effectively might be me, his alleged creator. 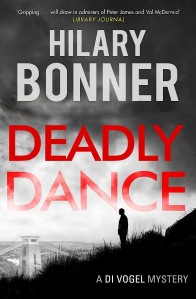 DI David Vogel is first on the scene when Melanie Cooke’s bruised and strangled body is discovered in Bristol’s red-light district. The evidence points to Melanie’s father being the killer, but Vogel’s on edge. The quick arrest is too easy, too straightforward.

When two new murders are reported, Vogel’s team broaden the search: new evidence suggests that there are three different, disturbed criminals. Any one of them could have killed Melanie, but which one did? Vogel’s team inch towards the answer, never suspecting that the killer is watching them too, waiting for his moment to strike.

Hilary Bonner was previously the showbusiness editor of the Mail on Sunday and the Daily Mirror. She lives in Somerset with her wife, the actress, Amanda Barrie.

*I was asked to host this guest post to help promote Deadly Dance. I did not receive a copy of the book or any other payment for doing so.* 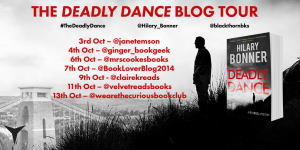