Rule Britannia is the debut of Alec Marsh and is published by Accent Press on 3 October 2019.

Today I have an extract of the book to share.

A fog of tobacco all but concealed the strutting satyrs, winged cherubs, and nude dancing nymphs that adorned the low ceiling of the Granville Club’s Long Bar. The cloud floated over a noisy, bobbing, gas-lit landscape of gentlemen patrons, lounging in the deep leather armchairs, standing chatting in groups or propped at the bar, spirals of smoke ascending from their pipes, cigars, and cigarettes. There was a lone chromatic renegade among the uniform landscape of black and grey cloth – Ernest Drabble, dressed in a country suit of green herringbone tweed, finished off with a muted yellow waistcoat, and a blue and silver striped tie; this of his college, Sidney Sussex, Cambridge. He was thirty years of age, and in the prime of life.

‘It’s busy for a Monday,’ he remarked, as he pressed his stomach against the bar to allow another patron to pass. Drabble’s companion, Percival Harris, dismissed this comment with a shake of the head.

‘You’ve been hiding away in your ivory tower for too long, Ernest. I’ve warned you about this before.’ Harris lifted his silver tankard above head height and wagged it jauntily, ‘Let’s have another.’

A moment or two later, the two men raised refreshed pints to their lips. They complimented the brew. Harris nudged Drabble’s elbow.

‘See the chubby chap at the end of the bar?’ Drabble scanned the crowd.

‘Over there,’ said Harris, pointing brazenly with his tankard. ‘Barrel-chested fellow just ordering now.’ Drabble peered along the bar and saw him.

‘Reckon if he shaved his hair off, he’d be a spit for Mussolini.’

Drabble laughed; the stranger certainly had the rubbery pout and the bulging eyes of the Italian leader, not to mention the tan.

‘Look,’ continued Harris, ‘even waves his ruddy arms about like Il Duce.’

Drabble smiled. ‘You don’t suppose he’s actually one of his doubles?’

‘Or the man himself?’ Harris shrugged. ‘Dictators have to have holidays, too.’ He looked back over. ‘I really ought to find out who he is; it might make something for the column. People just die for lookalikes, especially of Latin tyrants; they can’t get enough of them.’

Drabble chuckled; Harris was never off-duty. Evidently deep in thought, he watched Harris grope in his jacket pocket and take out his pipe, knock it on the bar and then remove a rectangular tin from his other pocket. Gritting his teeth about the stem of the pipe, he pressed a pinch of tobacco into its small bowl, struck a match, and dipped the flaming tip in – all achieved in a rather graceful, sweeping action. A plume of smoke erupted from it, followed by a second, then a third. Each billowed heavenward and Drabble watched them blend into the nicotine congestion above; for a moment, he saw the slender arm of a nymph and the primed bow of a cherub.

Then Harris broke the silence.

‘So where are you off to again – Devon?’

‘Cornwall,’ corrected Drabble. He had been dreading this topic.

‘Oh,’ he replied casually, ‘just a bit of research.’ ‘Research of course, but what?’

‘Same old stuff.’ Drabble looked down at his drink. ‘More Cromwell – nothing to interest your readers, I’m afraid.’

Harris arched an eyebrow at him.

‘Why don’t I believe you, Professor?’

‘Because you never do, Harris,’ he sighed wearily. Drabble remembered the several times before when Harris had used information supplied by him journalistically, rarely with his blessing. They eyed each other for a moment.

Drabble felt his resolve weaken; the truth was he liked his friend more than he always trusted him, but he also knew resistance was a waste of time. Harris had a way of getting it out of you in the end. Drabble set down his tankard and cleared his throat: ‘Well, since you asked,’ he paused, finding the words. ‘I confess… it’s all a touch morbid.’

‘Morbid?’ Harris’ eyes lit up. ‘Morbid in what way?’ ‘Promise you won’t breathe a word of it?’

Harris’ hand went to his chest and he frowned as though the mildest suggestion of indiscretion was a grievous insult.

‘You have my word,’ he declared, with the solemnity of an archbishop officiating at a state funeral. Drabble contemplated his friend’s face doubtfully one last time, and lowered his voice. He did a quick look left and right, and then announced: ‘I’m going to inspect the head of Oliver Cromwell.’

‘I know,’ sighed Drabble. ‘It sounds too good to be true, doesn’t it?’

‘It sounds bloody grotesque, old man. Christ alive. And you’re really positive that this is the actual bonce of the Lord Protector?’

‘That’s what I’ll find out.’ He grinned.

‘And suppose it is. What can this sensational artefact actually tell you, over and above what we already know?’

Drabble eyed him sharply. ‘Well, that remains to be seen. The fact is that no one has seen it for hundreds of years.’ He saw Harris’ nostrils flare and regretted this revelation. He cleared his throat, and tempered his enthusiasm: ‘The primary reason is simply to verify that it really is what this chap Wilkinson holds it to be – i.e. the decapitated cranium of Oliver Cromwell. But, as it happens, my next piece of research is going to be on the Restoration of 1660, and that was when they dug him up and everything else, so it’ll be interesting to see what marks there are on the skull, what bits are missing – you never know.’ He could feel his pulse beginning to quicken at the prospect but he caught his breath, and gave a grudging grimace as though it was a serious chore after all. ‘It might even lead to further avenues of academic endeavour,’ he concluded, in what he hoped was an especially boring-sounding voice.

‘What you really mean, Ernest, is that you just want to see it.’

The accusation stood a moment. Then Drabble broke into nervous laughter.

‘Come off it yourself,’ countered Harris, chuckling amiably. His tankard hovered at his mouth – a pose Drabble recognised as being preliminary to his draining its contents. ‘So, a question,’ the drink remained poised. ‘Or rather two questions: what is Cromwell’s head doing in Cornwall, and where the dickens is the rest of him?’ 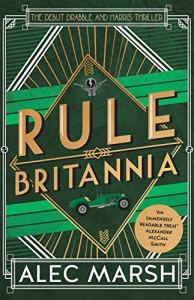 Ernest Drabble, a Cambridge historian and mountaineer, travels to rural Devon to inspect the decapitated head of Oliver Cromwell – a macabre artefact owned by Dr Wilkinson. Drabble only tells one person of his plans – Harris, an old school friend and press reporter.

On the train to Devon, Drabble narrowly avoids being murdered, only to reach his destination and find Dr Wilkinson has been killed. Gripped in Wilkinson’s hand is a telegram from Winston Churchill instructing him to bring the head of Oliver Cromwell to London.

Drabble has unwittingly become embroiled in a pro-Nazi conspiracy headed by a high-status Conservative member of the British government.

And so, Drabble teams up with Wilkinson’s secretary, Kate Honeyand, to find the head and rescue Harris who is being tortured for information…