Abby Williams is the author of The Time of Our Lives, published by Aria Fiction on 8 August 2019.

Abby has written a guest post about capturing the voices across generations.

Learning to listen – Capturing the voices of two generations

I always wanted to write feel-good fiction, you know, a decent enough novel that people would actually read and enjoy rather than use as a paperweight. The trouble was that despite my dreams of writing this page-turner, I couldn’t find the right character for the story I wanted to tell.

Then it came to me, what if it wasn’t one woman but two? Suddenly the idea of a multi-generational relationship with friendship at its core caught my imagination. I could see the two of them, riding the highs and lows of life with just each other to lean on. I was excited, until I realised this story would now be a two-hander, something I had never attempted before.

It was all a bit daunting. I had a feeling I would know how to write from a twenty-something perspective, having actually been one (albeit many moons ago), but I had yet to experience the delights of being a seventy something. So I tried writing the story just from the point of view of Erin, but it felt wrong. The story had no flow, felt stilted and frankly too much like an overly dramatic episode of Love Island.

It was time to embrace Lydia. Just who was she? What did she want? It was vital Lydia sounded and acted like a well-rounded person. I thought back to the things my mother had always told me. How even though your body is seventy odd, your mind’s still several decades behind. It was a good place to start as the moment I put myself in Lydia’s shoes, her character unfurled. I could see how scared she would feel about a new life, and the sense of powerlessness she would no doubt carry as she discovered her health was in trouble.

I felt I’d mastered Lydia fairly early on, but Erin, despite thinking she would be easier gave me a bit of a hard time. I mean when I was in my twenties there was no social media and my mobile phone was a brick with the legendary game – Snake (thanks Nokia) my reference points had changed, could I do this?

Then it hit me that although things had changed, feelings and emotions hadn’t. All right, there hadn’t been Instagram when I was in my twenties, but when I discovered my ex-boyfriend of several years had been cheating on me behind my back (you know who you are) that raw and painful feeling was unforgettable, some things always remained the same.

And so the story of Lydia and Erin flowed, and so did the feel-good feelings as I penned their story. When they laughed, I laughed, when they cried, I cried too. I realised that I wasn’t just writing their story, I was with two friends going on a journey. Thankfully I listened hard enough, and I think I found just the right characters to lead the way. 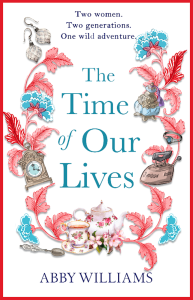 Twenty-six-year-old Erin has everything she’s ever wanted – a good job, a gorgeous fiancé and a best friend who’s always there for her. But suddenly her life comes crashing down around her. Unable to return home to her parents, she takes a room in a house nearby and her life starts over in the most unexpected of ways…

Seventy-six-year-old Lydia, who, shocked by the sudden death of her husband, is devastated to discover that he has left her in crippling debt. With no choice but to take in a lodger, Erin comes into her life. When they find a letter hidden in the attic old secrets come to light and, with Erin by her side, Lydia finds herself going on a trip of a lifetime.

Abby Williams is the pseudonym for Fiona Ford, writer of romantic up-lit and historical fiction. Fiona started out as a freelance journalist for titles such as Grazia, Sunday Mirror and Stylist before realising her passion lay in novels. Now she spends her days immersed in made-up worlds and reckons she has the very best job in the world. When she’s not writing, Fiona is a gym nut, but only so it means she can eat lots of cake and drink lots of wine – not necessarily in that order. She lives in Berkshire with her husband and two cats who she sometimes thinks she might love just a little bit more than all the humans she knows. The Time of Our Lives is her first romantic novel and she is now busy scribbling away her second.

*I was asked to host this content in order to publicise The Time of Our Lives. I did not receive a copy of the book or any other payment.*