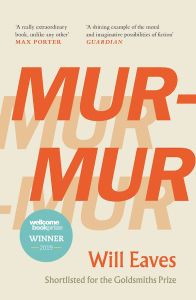 The starter book  this month is Murmer by Will Eaves. Based on the life of Alan Turing, the winner of the Wellcome Book Prize 2019, Murmur is described as the account of a man’s response to intolerable physical and mental stress.

Enigma Variations by Andre Aciman follows Paul and the great loves of his life, from a youthful infatuation with a cabinet maker to a man he meets at a tennis court. Aciman’s other novels include Call Me by Your Name , Out of Egypt and Fine Me.

In Find Me by J.S. Monroe Rosa walked to a pier one evening and jumped. The coroner says suicide, her boyfriend Jar is obsessed with proving she’s still alive. Then he receives an email from Rosa.

Who Killed Marilyn Monroe? by Liz Evans sees PI Grace Smith on the trail of a murderer, the killer of Marilyn Monroe – seaside donkey.

In Crooked Heart by Lissa Evans 10 year old Noel Bostock is evacuated from London during the Blitz and finds himself with the unscrupulous Vera Sedge, who draws Noel into her money making schemes.

The Heart’s Invisible Furies by John Boyne follows Cyril Avery from birth to near the end of his life and his search to find his place in the world.

In The Furies by Katie Lowe, a 16 year old girl is found dead in 1998, dressed in white and posed on a swing. Four girls know what happened and have kept silent. Until now.

So there we have it, from Turing inspired fiction to murder and mystery in six highly improbable steps. And I’ve actually read one of them! Have you read any of the books? Where would your six degrees take you?