First up to suggest a quiet novel is Harriet Tryce. Harriet’s debut novel, Blood Orange was published by Wildfire on 21 February 2019.

She has suggested by Duplicate Death by Georgette Heyer, published by Arrow.

A civilised game of Duplicate Bridge ends in a double murder in which both victims were strangled with a tourniquet of picture wire. The crimes seem identical, but were they carried out by the same hand? The odds of solving this crime are stacked up against Inspector Hemingway. Fortunately, this first-rate detective doesn’t miss a trick.

“I love the detective novels written by Georgette Heyer, particularly one called Duplicate Death. It’s a classic locked room mystery with some truly toxic characters and a deeply satisfying love story to boot. It was reissued in 2010 and it’s a cracking read.”

The second book is suggested by Alex Caan. Alex’s latest book First to Die, was published by Bonnier Zaffre on 14 June 2018.

He picked The Other Half of Happiness by Ayisha Malik, published by Bonnier Zaffre. 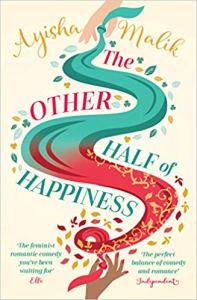 Sofia Khan is just married. But no-one told her life was going to be this way . . .

Her living situation is in dire straits, her husband Conall is distant, and his annoyingly attractive colleague is ringing all sorts of alarm bells.

When her mother forces them into a belated wedding ceremony (elopement: you can run, but you can’t hide), Sofia wonders if it might be a chance to bring them together. But when it forces Conall to confess his darkest secret, it might just tear them apart.

A book to make you smile, laugh and cry, this is the story of a mixed-race marriage and a mixed-up family, for anyone who’s ever struggled to balance their pride with their principles, or stuck around to try to mend a broken heart.

“I think it captured the world I grew up in so well, and it’s a community I’ve moved away from physically as mine is all up North in Manchester, but this novel just reminded about the good and the bad. Plus it was hilarious and also very real.”

So there we have it, two books that had completely passed me by. Have you read either of them? Do you have a quiet book you’d like to shout about? Let me know.