The Courier by Kjell Ola Dahl was published by Orenda Books in paperback on 21 March 2019.

Orenda Books have allowed me to share an extract from the book. 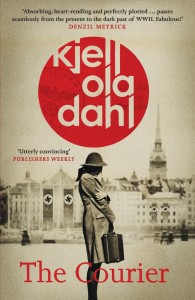 In Oslo in 1942, Jewish courier Ester is betrayed, narrowly avoiding arrest by the Gestapo. In great haste, she escapes to Sweden whilst the rest of her family is deported to Auschwitz. In Stockholm, Ester meets the resistance hero, Gerhard Falkum, who has left his little daughter and fled both the Germans and allegations that he murdered his wife, Åse, Ester’s childhood best friend. A relationship develops between them, but ends abruptly when Falkum dies in a fire.And yet, twenty-five years later, Falkum shows up in Oslo. He wants to reconnect with his daughter Turid. But where has he been, and what is the real reason for his return? Ester stumbles across information that forces her to look closely at her past, and to revisit her war-time training to stay alive…

*I was asked to share an extract of The Courier to help promote publication of the book. I have not received a copy of the book or any other payment for doing so.*