The Glovemaker by Ann Weisgarber was published by Mantle on 21 February 2019.

Ann kindly answered a few of my questions.

1. Tell us a little about The Glovemaker.

The story is set in America’s Utah Territory in 1888 when The Church of Jesus Christ of Latter-day Saints (LDS or Mormons) was under tremendous pressure from the federal government. At that time, church doctrine included the practice of plural marriage, a felony. To avoid being arrested, men with more than one wife sometimes hid in Utah’s canyon country.

The setting for The Glovemaker was one of the places where the men hid. The two narrators, Deborah and Nels, are caught in the morale dilemma of obeying the law or helping “one of their own.”

Of all things, it was an apple orchard in Utah’s Capitol Reef National Park. The Park Service keeps ladders in the orchards to encourage visitors to help themselves. During one vacation at the park, I picked some fruit and as I did, I thought about the people who planted the original trees. According to the park’s brochure, they were a handful of families who came to the area in the 1880s.

Who were they? To answer my question, I bought books from the visitor center. The eight families were Mormons. Yet, as I dug deeper, there was evidence they didn’t conform to all the practices of their faith. Doing more research, I read that Floral Ranch, located in the park, had been a hideout for men hiding from the law.

The “who were they?” question continued to haunt me until I sat down and began to write.

I’m not sure if I’m a planner or if I wing it. I do write a bio for each of the main characters with the basics such as birthdate, birthplace, age when the story begins, what they want, and what they regret. I also write a one-page outline for the entire story. That leaves a lot to the imagination. But having said this, before I start a chapter, I write a one-page outline for the chapter. Then I start filling in the white space.

4. Is there anything about the process of creating a novel that still surprises you?

The process of starting with a vague idea and turning it into a 300-page story with fully-realized characters – at least I hope they are – baffles me. How does it happen? I don’t know other than it’s a combination of imagination, the willingness to pour your heart into a project that could fail, and sheer stubborn determination to see it through to the end.

Great question! I live on an island off the coast of Texas and my house, on 17-foot high pilings, is across the road from the Gulf of Mexico. Long walks on the beach instantly relax me. I’m a fan of baseball and keep score for the pure fun of it when I’m at games. My idea of the perfect vacation is a long hike in a secluded national park.

Only one? The thought of living with only one book makes me want to weep. But if a hurricane blew away my house, I hope I could salvage Charlotte’s Web by E.B. White. It’s the novel that made me fall in love with books, and I have my original battered copy on my bookshelf. The story speaks to the power of the written word and would sustain me in a world with only one book.

I wish someone would ask: As an author, what have I learned from readers?

After meeting with several hundred book clubs, I’ve learned that each reader sees a book from her unique point of view. A reader’s experiences and family history shape her perception of a book. A reader’s age, gender, and even where she lives impacts her interpretation. Two people can read the same book and have opposing reactions to it. Readers are the ones who give meaning to a story. Without readers, stories are just words on paper. 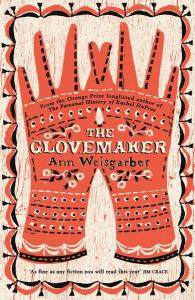 For almost four years, men came to my cabin carrying trouble on their backs, each one haunted and looking over his shoulder . . . They showed up during the spring, they appeared in the summer and early fall. But never now, never in January . . .

Winter, 1888. In the inhospitable lands of Utah Territory, glovemaker Deborah Tyler awaits her husband’s return home after months working across the state. But as his due date comes and goes without a word, Deborah starts to fear the worst. Facing a future alone, matters are only compounded when a desperate stranger arrives on her doorstep. And with him, trouble.

For although the man claims to just need a place to rest for the night, he wouldn’t be here in the bitter month of January if he wasn’t on the run. And where he goes, lawmen are sure to follow. Lawmen who wouldn’t think twice about burning Deborah’s home to the ground if they thought she’d helped their fugitive.

With her husband’s absence felt stronger by the minute, Deborah must make a decision. A decision that will change her life forever . . .

Ann Weisgarber was born and raised in Kettering, Ohio. After graduating from Wright State University in Dayton, Ohio, she was a social worker in a psychiatric hospital before moving to Houston, Texas, with her husband. She earned a Master of Arts in Sociology at the University of Houston and taught high school and later, sociology at a junior college. She has lived in Boston, Massachusetts, and Des Moines, Iowa, but now splits her time between Sugar Land, Texas, and Galveston, Texas.

*I was asked by the publisher to post content in order to promote publication of The Glovemaker. I provided the questions and the author provided the answers via the publisher. I received a copy of the book but did not receive any other payment for hosting this content.*