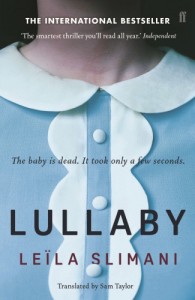 Another Lullaby was written by Leila Slimani. In it, Myriam feels lucky to have found the perfect nanny in Louise. However, as she and her husband become more dependent on Louise cracks begin to show, with devastating consequences.

A nanny who has different childcare ideas,  is of course Mary Poppins. The tale of the magically nanny by P.L.Traveers, who flies in to the rescue of the Banks family has recently been revisited in a new film starring Emily Blunt.

Her husband, and co-star in another film is John Krasinski, who is also the lead in the Jack Ryan series. That eponymous hero first appeared in Tom Clancy’s The Hunt for Red October, in which two superpowers tussle over a submarine miles under the sea.

Scientist Pierre Aronnax, his servant Conseil and whaler Ned Land all head 20,000 Leagues Under the Sea in Jules Verne’s classic tale of the mysterious Captain Nemo and his underwater adventures. Verne wrote many novels including the classic Around the World in 80 Days.

Many years later, Python and adventurer Michael Palin recreated the journey. He also followed in the footsteps of Ernest Hemingway in Hemingway Adventure.

All of that has to lead us, inevitably to Ernest Hemingway. In Death in the Afternoon, Hemingway focussed on his passion for Spain and the controversial pastime of bullfighting.

So there we have it from fist fights to bull fights in six unseemly steps. Have you read any of them? Where would your steps take you?