James Brabazon’s debut novel, The Break Line is published by Penguin on 24 January 2019.

Penguin have kindly allowed me to share an extract from the book with you.

He eased himself off the bed and stood an arm’s length in front of me: six foot six and two hundred and fifty pounds of soft- spoken, stone- cold killer. Then, at a half crouch, he loped towards the far left- hand end of the room. He pointed at me, put his finger to his lips again and stood there, stock-still, with one ear pressed against the beige wall. A full minute passed. I shifted my weight, but he held up his hand as if stopping traffic at a checkpoint.

Another minute. And another – Sonny Boy unmoving, listening. ‘You’re all right,’ he blurted out, finally. ‘It’s grand. They’ve gone. Ha! How’ve I been keeping? Christ, Max, you wouldn’t fuckin’ believe it if I told you. You wouldn’t believe it for a moment!’ He sighed and laughed and sat back down on the bed, hard. ‘Sure, you wouldn’t believe a single word of it. But there you go.’ He looked down at the floor.

We grew up a country mile and a world apart in County Wicklow. His accent echoed my own childhood brogue, which had been softened in the army. I inched towards the bed. ‘Believe what, Sonny? What’s up?’ Without warning a deep, trembling sob spluttered out of him, followed by an awful keening so forceful it made me recoil. He looked up. Tears blurred his eyes. His teeth were clenched, the muscles in his jaw bulging. I put my hand out to him, fingers first, like seducing a wary dog. He said, did, nothing. I put my hand on his shoulder. He flinched. ‘Hey, Sonny,’ I whispered. ‘It’s OK. I’m here. It’s grand.’ I sat next to him, slowly, deliberately lowering myself on to the bed next to him. His hands had fallen into his lap. Tears were falling on them. I took his pistol hand in mine and held it gently. ‘It’s all right now. It’s all right.’ Sonny Boy half turned to me. His lips were trembling, his jaw slackened. ‘You wouldn’t fuckin’ believe it, Max,’ he sobbed, trying to compose himself. ‘Believe what, Sonny? Do you want to tell me about it?’ Nothing.

‘We don’t have to talk. Hey, remember that time in Kabul when –’ ‘You’re going, aren’t you?’ ‘Going where, Sonny?’ ‘There.’ ‘What, Sierra Leone?’ As soon as I spoke I realized my mistake. He gripped my hand hard and looked me in the eye as if suddenly seeing something for the first time. ‘That’s why they sent you to see me, isn’t it? They’re still sending you. That’s why they sent me.’ His voice was quiet, steady. ‘Ah, not you, Max. Please, not you.’ I went to reassure him, but it was too late. He lurched into me, twisting and crashing me on to the floor. My hand in his; his face against mine; his teeth at my ear, he deafened me with a cry fit to rend my soul. 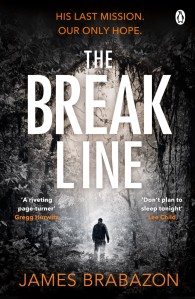 The British government denies all knowledge of the work he does on their behalf to keep us safe. But Max and his masters are losing faith in each other. And they give him one last chance to prove he’s still their man.

Sent to a military research facility to meet a former comrade-in-arms, Max finds the bravest man he ever knew locked up for his own protection. His friend lost his mind during an operation in West Africa. The reason? Absolute mortal terror.

Max is determined to find out why.

Ahead lies a perilous, breath taking mission into the unknown that will call into question everything that Max once believed in.

James Brabazon is an award-winning frontline journalist and documentary filmmaker. Based in London, he has travelled in over seventy countries, investigating, filming and directing in the world’s most hostile environments. His awards include the Rory Peck Trust International Impact Award, the Rory Peck Freelancer’s choice Award, the IDA Courage Under Fire Award and the FPA’s TV News Story of the Year. He has made over thirty films broadcast by the BBC, Channel 4, HBO, CNN and the Discovery Channel. He lectures on the ethics and practicalities of reporting from war zones and his reportage has been published in the Observer and the Guardian. He is the author of the critically acclaimed memoir My Friend the Mercenary. The Break Line is his first novel.