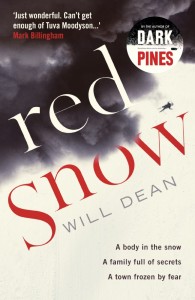 One suicide. One cold-blooded murder. Are they connected? And who’s really pulling the strings in the small Swedish town of Gavrik?

Tuva Moodyson, deaf reporter at the local paper, has a fortnight to investigate the deaths before she starts her new job in the south. A blizzard moves in. Residents, already terrified, feel increasingly cut-off. Tuva must go deep inside the Grimberg factory to stop the killer before she leaves town for good. But who’s to say the Ferryman will let her go?

Tuva Moodyson has just rescued the janitor of the Grimberg liquorice factory from his broken down car. As she drops him off at the factory she watches as the factory owner jumps to his death from one of the two chimneys. Then a body is found, liquorice coins covering his eyes. Tuva must find the killer dubbed the Ferryman before she leaves town for good.

The good thing about discovering a new series later than everyone else is that you don’t have to wait as long for the next book. I didn’t read the first Tuva Moodyson book, Dark Pines until a few months after it’s paperback publication and so that meant I thankfully didn’t have to wait too long to read the follow-up novel, Red Snow.

Red Snow allows the reader to make a welcome return to Garvrik Kommun and it’s inhabitants, quirky though some of them may be. This time the focus is on the local liquourice factory, a building that was only really mentioned briefly in Dark Pines.

The factory is a darker, solemn place, Willy Wonka’s factory reversed. The reader can’t imagine bright colours or wonderful sweet treats being invented here. Instead, the world seems to turn to shades of grey when we walk through the large factory doors. Many generations of Gavrik residents have worked in the factory. However it seems that this has made the factory something of a prison, for the workers and the family, rather than a means of earning money to live.

The characters behind those doors are colourful though. The Grimberg family are eclectic, mysterious and highly superstitious. Cici is a wonderful character, adorned with many colours, her eccentricities enliven the surroundings and bring about a different side to Tuva. Talking of eccentric characters, it was good to see the return of the troll sisters in Red Snow. Though they only appeared for a few scenes, they still manage to add to the story.

The weather is very much a character in the novel. It affects everything, from the challenges of travelling to preparations for a funeral. There is a sense that the snow covering the town of Gavrik deadens it. It adds a quietness and stillness to the town that is shocked awake by the deaths. It also hides dangers that may not be missed at any other time of year. There is a great sense of place about the book. I can easily imagine Gravik and the surrounding areas in my mind’s eye. There is an eeriness yet a comfort about the place, a town which feels separate from the rest of the country and therefore susceptible to strange and deadly events.

Tuva’s character developed further in Red Snow. We read about her feelings regarding her mother, and how that relationship still affects her life. She does seem to become more like a schoolgirl when she develops a crush. It was also good to see more from Tuva’s work colleagues and friends.

Will Dean grew up in the East Midlands, living in nine different villages before the age of eighteen. He was a bookish, daydreaming kid who found comfort in stories and nature (and he still does). After studying Law at the LSE, and working in London, he settled in rural Sweden. He built a wooden house in a boggy clearing at the centre of a vast elk forest, and it’s from this base that he compulsively reads and writes. He is the author of Dark Pines.