I spotted Book Bingo posts from the fabulous bloggers Cleo over at CleopatraLovesBooks and Marina at Finding Time to Write and I thought it seemed like a fun way of looking at the books I had read over the year. I gave it a go last year and thought I’d try my hand at it again this year. 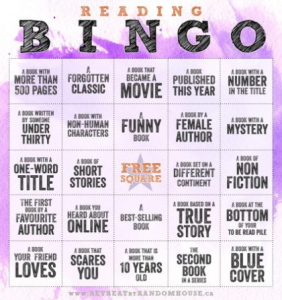 I read quite a few older books in 2018 but the one I’ll pick for this square is Miss Buncle’s Book by D.E. Stevenson. Miss Buncle decides to write a book, in order to bring in more income. The book is a roaring success, which makes life difficult for Miss Buncle given she’s based the characters on people from her village.

A book that became a movie

This would have to be The Guernsey Literary and Potato Peel Pie Society by Mary Ann Shaffer and Annie Barrows, with the film also released in 2018. I instantly fell in love with this epistolary tale of war-time Guernsey.

There are of course many books that could fit this square but I’ve gone for The Curious Heart of Ailsa Rae by Stephanie Butland, a moving and uplifting tale of a woman coming to terms with her new life after a heart transplant.

A book with a number in the title

A book written by someone under thirty

The Mysterious Affair at Styles was written by Agatha Christie when she was in her twenties but wasn’t published until the year she turned thirty. I’m still counting it for this square though!

A book with non-human characters

I didn’t read a book in 2018 that had a non-human character in a lead or starring role so I’ll have to leave this square blank. Must try harder!

I had a choice of two to pick from but I’ve gone for my first ever Jeeves and Wooster book, Stiff Upper Lip, Jeeves! by P.G. Wodehouse. I was suprised at just how funny and entertaining the book was. I’m determined to read more in the future.

A book by a female author

I have many, many books that could fit this square and so I’ve gone with one that was wrote by two women. Oh My God, What a Complete Aisling by Emer McLysaght and Sarah Breen follows Aisling as her ordered life suddenly goes off the rails.

A book with a mystery

Again a lot of novels could have fitted this square but I’ve gone for Blood & Sugar by Laura Shepherd-Robinson. Out January 2019, it is a tightly plotted tale of murder, racisim, slavery and power.

A book with a one word title

Only one book in 2018 with a one word title and that was Sunburn by Laura Lipman.

A book of short stories

Black Swans by Eve Babitz, republished by Counterpoint, this is a fictionalised collection of stories from Eve’s life in LA in the 70s, 80s and 90s.

My reading year isn’t complete without a new book from a favourite author. I made a welcome return to the lives of Brunetti and his family and friends in The Temptation of Forgiveness by Donna Leon.

A book set on a different continent

Not That I Could Tell by Jessica Strawser, a mystery about the disappearance of a woman and her kids from a small town in the US.

A book of non fiction

Out of Thin Air by Anthony Adeane is based on the true life mystery surrounding the deaths of two men in 1970s Iceland, and the fall out from the investigation that followed.

The first book by a favourite author

A book you heard about online

The majority of the books I read I have heard about online. One such book I would not have come across otherwise was The Fortnight in September by R.C. Sheriff, a delightful book about a family’s annual holiday.

Anatomy of a Scandal by Sarah Vaughan, the first book I read in 2018, a thriller that could be a true life novel on political sexual scandals.

A book based on a true story

A bit of a stretch but Murder on the Orient Express was inspired by the Lindbergh baby kidnapping and so I wil use it for this square, given I’ve already used Out of Thin Air.

A book at the bottom of your TBR pile

Perfect Prey by Helen Fields, out in 2017, I finally got around to reading the second Luc Callanach investigation, and a rather gruesome one it was.

A book your friend loves

One book I found a lot of my book blogger friends raving about was Come and Find Me by Sarah Hilary. The latest Marnie Rome book sees her on the search for an escaped convict.

A book that scares you

I don’t read books that are classed as scary so I can’t fill this square.

A book that is more than 10 years old

The Murder of Roger Ackroyd, which is only 92 years old and in which poor Roger has been bumped off, though the murderer has made the mistake of killing Ackroyd when Hercule Poirot is around.

The second book in a series

Red Snow by Will Dean, the second Tuva Moodyson book, see’s Tuva investigating a suicide and a murder at the local licquourice factory.

A book with a blue cover

Murder in the Snow by Gladys Mitchell, in which Mrs Bradley goes to spend Christmas with her nephew but gets caught up in a murder, with a ghost thrown in for good measure.