Way back in January I was lucky enough to be surprised with a ticket to see The Moustrap. I had been wanting to see the play for years and so a late birthday treat meant I could finally watch it.

Together with a group of friends we made the trip down to St Martin’s Theatre, where the play, originally written as a present for Queen Mary’s birthday, has run since 1974. It is, in fact, the world’s longest running performance, as it now nears its 67th year of shows, with over 27,000 performances in that time. Richard Attenborough appeared in the first 700 performances and other well-known names such as Hugh Bonneville, Miranda Hart, Sir Patrick Stewart and Julie Walters who all appeared in a special one-off staged reading.

As for the plot of The Mousetrap it is hard to say much without giving it all away. There is of course a mystery, a country house and a limited set of characters, all par for the course with an Agatha Christie tale.

What surprised me the most about the play was how funny it was. Much of this came down to the actors delivery of their lines. It was easy to get caught up in the storyline, forgetting that you were actually watching a play.

I had figured out what the denouement was going to be just before the interval and my friends and I all had differing ideas as to what that denouement was. I enjoyed watching the rest of the play listening out for clues as to whether I was on the right track, and thankfully I was!

The Mousetrap was my first West End show, and I wasn’t disappointed.

As for the ending. Well I can’t tell you that, I’ve been sworn to secrecy. 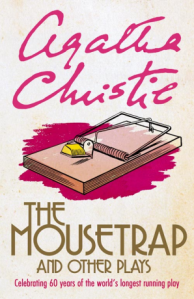