Mostyn Thomas and the Big Rave, the debut novel of Richard Williams was published by Graffeg on the 8  November 2018.

Graffeg have kindly allowed me to share an extract from the novel with you.

Every morning, suspended in his harness, Trevor would pan across the ancient estuary of the Cleddau to the heads and out to the ocean. On a calm, clear day, the rising sun would beam through the clouds of mist that hung over the water like sleeping ghosts, then explode into the thousands of fibres and textures that existed on the shores.

On rough days, thundering swells smashed over the headland, the torrents of spray shimmering in the bright morning sun. To be a lone spectator peering down on this unforgiving natural arena made him tingle with life like nothing else.

It was early April, a Tuesday. Trevor always knew to expect a perilous day in the harness when scores of surfers with their boards bound tightly to their roofs went soldiering across the bridge just after first light.

Trevor sometimes wondered, from his position a hundred feet above the open estuary, what surfing must be like. He’d often go down to Newgale Sands with Janice after work in the summer for a picnic and watch the surfers. He envied the flow of tanned girls and boys coming and going in their camper vans, parking up, flirting, touching, care-free. They’d skip over the pebbles with their boards and paddle out into the corduroy ocean as the sun slowly descended over St Brides Bay.

To be out there, away from the safety of the shore, those fluid silhouettes bold against the fiery skies around them, seemed to Trevor to be the ultimate expression of freedom.

If he had his time again, Trevor thought he would be a surfer. It was too late to start now, though. Despite decades of physical strain, at sixty-two he was sailing into his twilight years quite painlessly, so he felt no regrets.

Lowering himself into position, Trevor felt the rear harness clips digging into his back and carefully placed his painting gun up on the underside ledge of the bridge. He reached around and fumbled blindly, untwisting the clips to relieve the pressure, then reclaimed the painting gun and began to rub the obstructed barrel with his puffed, leathery fingers.

A strong gust of wind rattled through the underside of the bridge, blowing Trevor into a sway. He tried to settle himself, but felt a rapid loosening in the harness. One of his clips had come undone.

Within seconds he was slipping out of the seat. He grabbed for the safety rope and missed. His left knee tried to buckle onto the seat fibres as his body was forced out of the harness. He grappled to cling on. The unsettled water a hundred feet below drew the realisation that in a few seconds he would hit its surface.

He began to scream, but the swirling wind, thrashing rain and rumbling traffic on the bridge above smothered his cries. He spun around, scissor-kicking in desperation.

Finally, his hands left the rope.

The fall mangled Trevor, his body driven down into the cold water, the oxygen sucked from his lungs. He surfaced, flailing to stay afloat until a trickle of air could flow into him. His tool belt began to sink him like an anchor as he shook and contorted and managed to free himself.

A small sand bar was visible in the distance and he slashed towards it. He thought of Janice, of his two boys, Jethro and Jac, repeated the last words he’d said to Jethro that morning. ‘I’m so sorry, boy. I didn’t mean it.’ He replayed the image of his son leaving the house with his head bowed, without saying goodbye.

Within a minute, he rapidly lost power. The muscles in his upper arms burned trying to keep momentum. Sodden layers of clothing were pulling him down. He stopped and turned onto his back to catch his breath. Cast around him was his bridge, majestic with its new coat of paint. He rolled back onto his front. He had to keep moving.

Every stroke was crucial. Dark thoughts flooded his mind. Would he sink and disappear, leaving Janice and the boys eternally searching? Or would he float, bloat and wash up stinking on the beach of the Jolly Sailor to a vigil of seagulls?

He felt his body tingling. There was a warmth now. He became more at ease in the water, kept moving toward the shore. Just a couple hundred yards. His will grew. Trevor stabbed down with his feet, searching for ground. He found it. The last fifty yards would be a wade in the deep salty mud to the bank of the estuary.

Trevor fell forward, face down in the shallows and crawled the final distance onto the sand. He’d made it.

He gazed across the small beach, regaining his breath, and saw a fat tabby cat staring at him from the top of a wall. The water began to dissipate from his body and the cold stabilised. He felt dead and alive in equal measures.

In the moments afterward, Trevor convinced himself that today was a divine rattling for him to change his ways. He would never be afraid again. Fear had buried most of his aspirations, all through his life. But now everything was clear. From this moment forward would be a new beginning. He couldn’t wait to get home to give Janice the good news.

A pain shot up Trevor’s arm and his chest tightened. His eyes burst open. He looked up at the bridge, now blurred, his world darkening. He felt coarse sand in the corner of his lips and moved instinctively to swipe it, but his heart stopped and he swiftly passed away.

The tabby cat wandered over and sat on Trevor’s warm back and cleansed itself until the old man’s body went cold. 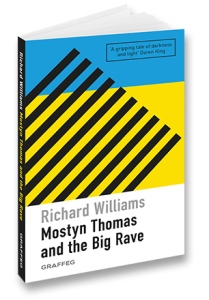 Pembrokeshire – 1994. Mostyn Thomas is an ageing farmer, down on his luck, on the brink of bankruptcy. When he runs into Jethro, a young raver, his fortunes appear to take a positive turn. The pair hatch a plan to solve Mostyn’s money problems by holding a rave on Mostyn’s secluded land. Secretly mobilizing the locals of the village pub they plan the greatest money-spinning event in the history of Little Emlyn: Lewistock.

But not all goes according to plan. As we count down to the August bank holiday rave and young revellers begin to pour in from all corners of the county, the tension ramps up. Moneylenders, drug dealers, the county council and the bank all set a collision course with Mostyn and Jethro. It’s not clear who will get out alive…

Richard Williams was raised on a dairy farm in north Pembrokeshire. Following a degree and masters degree in Development Studies from Exeter University and LSE respectively, Richard worked as a technical writer at the newly-created Global Fund to fight HIV/AIDS, TB and Malaria.

His later success in the restuarant industry has been balanced in recent years with creative writing courses with Anjali Joseph (UEA) and his current mentor, Daren King.