I’m cheating a little today by re-sharing a review. The Intruder by P.S. Hogan was previously released as A Pleasure and a Calling. In case you missed it the first time, here’s my thoughts on the book (which I have to say I still recall enjoying, and how creepy it was!) 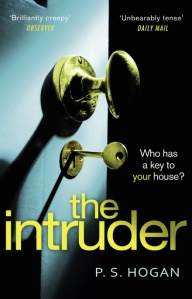 William Heming is an estate agent. He’s kept a copy of every key to every house he’s ever sold. Sometimes he visits them. He lets himself in when the owners are out. But what will happen if he gets caught?

What will he do next?

Most of us have a natural inclination to nosiness. We may try to peer surreptitiously at a fellow passenger’s book on a train, or tried to glance in through windows at night when the curtains aren’t drawn. We may want to know what the latest Hollywood star was wearing or who they are dating, or eagerly try to catch the glimpse of a bride in her dress if we stumble across a wedding. This is of course innocent enough. But what happens if that natural inquisitive nature turns into something more sinister? What is the next step, voyeur, stalker, killer…?

It is obvious from the outset that Mr Heming, and he is always known as Mr Heming, has sociopathic tendancies. He is a loner, blending into the background. He has a thriving business as an Estate Agent, yet lives in a flat rented through a shell company he owns. Oh and he has a key to every house he has ever sold, using them to ‘visit’ the properties and stay when the owners are out.

Oh this is a dark and twisted tale. I found myself at times not wanting to read any more of Mr Heming’s inner thoughts but felt compelled nonetheless to read on, the impending sense of dread ever increasing.

Through his meandering reminisces we see that Mr Heming’s issues have been around since he was a small child. His hiding and spying never seem to be innocent childhood japes and his actions then speak volumes as to the type of man he is to become. It is not so much the tale of his current predicament that is disturbing, though it is by no means comfortable, it is these reminisces that make it to me even more disturbing and sinister.

The use of the first person narrative is an excellent story-telling device. Listening to him recall his tale he makes us as the reader almost complicit, making the perils of discovery our own as well as his.

It also easy to be contradictory with this book. I spent half of my time wanting him to be caught in the act and the rest of the time willing him to hurry before he was revealed.

I can’t recall reading anything similar to this book but it had me gripped, I read the last half of the book in an afternoon. It left me with the feeling of being observed, and a reminder to perhaps change my locks….