The first novel to be suggested has been picked by Neil Broadfoot, who’s latest novel, No Man’s Land, was published by Constable on 6 September 2018. He’s chosen Tag You’re Dead by Douglas Skelton, published by Contraband. 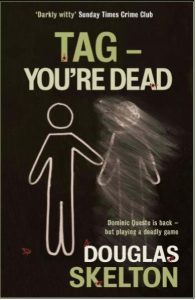 Maverick investigator Dominic Queste is on the trail of missing butcher, Sam Price.

But he finds a killer with a taste for games.

What began as a simple favour for his girlfriend quickly descends into a battle for survival against an enemy who has no qualms about turning victims into prime cuts.

Amidst a twisted game of cat and mouse, suspicious coppers, vicious crooks and a seemingly random burglary, Queste has to keep his wits about him.

Or he might just find himself on the butcher’s block.

“Tag You’re Dead by Douglas Skelton is one of crime fiction’s best-kept secrets. It’s his second Dominic Queste story and it’s got all the humour and pace that you’d expect from Douglas, along with a real deepening of the characters, a palpable sense of danger and a cracking plot. It didn’t get a lot of attention when it was released, which is a shame. It’s a treat that no reader should miss.”

The second novel suggested is Unsticky by Sarra Manning, published by Corgi. It was suggested by Rebecca Reid, who’s debut novel, Perfect Liars, was published by on 1 September 2018 in ebook (and is out in paperback on 21 February 2019). 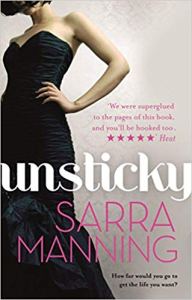 Money makes the world go round – that’s what twenty-something Grace Reeves is learning. Stuck in a grind where everyone’s ahead apart from her, she’s partied out, disillusioned, and massively in debt. If she’s dumped by another rock-band wannabe, squashed by anyone else at her cut-throat fashion job, or chased by any more bailiffs, Grace suspects she’ll fall apart…

So when older, sexy and above all, wealthy art-dealer Vaughn appears, she’s intrigued against her will. Could she handle being a sugar daddy’s arm-candy?

Soon Grace is thrown into a world of money and privilege, at Vaughn’s beck and call in return for thousands of pounds in luxurious gifts, priceless clothes – and cash. She’s out of her depth. Where’s the line between acting the trophy girlfriend, and selling yourself for money? And, more importantly, whatever happened to love?

“Unsticky! I honestly don’t know why it wasn’t the best selling love story of our time. It’s about Grace, a debt riddled millennial who learns that landing your dream job doesn’t guarantee a happy ending, who falls in love with Vaughn, a super rich, super complicated art dealer. It’s a perfect story about complicated, spikey, fascinating people changing each others lives and I cannot recommend it highly enough.”

So there we have it, two more books that had passed me by. Have you read either of them? Do you have a quiet book you’d like to shout about? Do let me know.