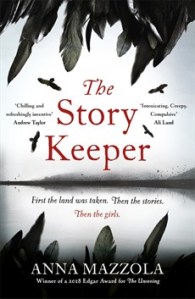 Audrey Hart is on the Isle of Skye to collect the folk and fairy tales of the people and communities around her. It is 1857 and the Highland Clearances have left devastation and poverty, and a community riven by fear. The crofters are suspicious and hostile to a stranger, claiming they no longer know their fireside stories.

Then Audrey discovers the body of a young girl washed up on the beach and the crofters reveal that it is only a matter of weeks since another girl disappeared. They believe the girls are the victims of the restless dead: spirits who take the form of birds.

Initially, Audrey is sure the girls are being abducted, but as events accumulate she begins to wonder if something else is at work. Something which may be linked to the death of her own mother, many years before.

Audrey Hart has left behind a troubling incident in London and travelled to the island of Skye. There she is to be employed by Miss Buchanan, charged with collecting the folk and fairy tales of the inhabitants of the island. She also hopes to find out more about the death of her mother, who had died years ago on Skye. But when Audrey discovers the body of a young girl and another disappears she wonders if there is some truth behind the fairy tales.

The setting of the novel is very atmospheric. I could imagine the solitude, the workers houses and the waves crashing on the shore. The impression given was one of darkness, or an island toiling under rain clouds, no doubt aided by mirrored weather in the real world.

Audrey is an interesting character. Tenacious, strong-willed and kind, she is rebelling against society in her own way. She finds strength she didn’t know she had without even realising it. Moving to Skye was a big thing for her, a step into the unknown. In a time when women were little more than property, Audrey is hardly aware that she is a trailblazer of sorts. Skye, despite the troubles it brings to her life, is also the key to her personal freedom. The other characters all have their secrets to reveal. Each one, from Audrey’s employer to children playing with a frog, add layers to the story, allowing a fully formed image of the island to emerge.

The fairy tales and folk tales aspect of the story were very interesting. They added layers to the story, giving it hints of the magical, the closing ranks of the locals and their belief in the mysterious making the story seem more claustrophobic and menacing. They also allowed those in power to reject complaints or crimes against the poor, disappearances put down to ignorance rather than real, concrete, human interference.

As with The Unseeing, The Story Keeper is as a much a social commentary as a mystery novel. The treatment of the lower classes and women frustrate and anger, much as they should. They show how far society has come but also how far is still to go.

I was soon drawn into the story of the missing girls and Audrey’s search for the truth.  An entertaining, atmospheric read, I look forward to reading more from Anna Mazzola in the future.

Anna Mazzola’s first novel, THE UNSEEING, was published to critical acclaim in 2016. She is a criminal justice solicitor and lives in London with her husband and two children.

This was book 12 in my 20 Books of Summer challenge.

I have also read and enjoyed The Unseeing by Anna Mazzola. You can read my review here.