Published by One World Publications

Tuva Moodyson, a deaf reporter on a small-time local paper, is looking for the story that could make her career.

A web of secrets. And an unsolved murder from twenty years ago.

Can Tuva outwit the killer before she becomes the final victim? She’d like to think so. But first she must face her demons and venture far into the deep, dark woods if she wants to stand any chance of getting the hell out of small-time Gavrik.

Tuva Moodyson has moved to Gavrik to be near her ill mother. The small Swedish town is surrounded by huge pine forests. The trouble is, Tuva isn’t a fan of the woods. Her ideal scenery would be the bright lights of a big city. She spends her days writing about the small news of a small town. Then a body is found in the forest, a man, shot, and with his eyes removed. It echoes back to 20 years ago when three bodies with similar injuries were found. Can Tuva find out who’s been hunting more than Elk before more bodies turn up?

There is very much a closed room feel to Dark Pines, despite it being set in the vastness of the pine forest. The many trees begin to feel oppressive, the fact that anything could be hiding just out of sight helps to ratchet up the tension. There’s also a limited number of suspects which again aids to increase the unease.

Tuva is a great character. Tenacious, driven, with a genuine understanding that the news matters, and that it is important to report it well. It was refreshing to realise that the reader doesn’t really know much about Tuva but is still drawn to her. We know that something happened in London when she lived there, though not what. We know she is deaf, and how that deafness came about. We find out about her difficult relationship with her mother after the death of her father. But we are never really told what she looks like, except her age and that she has hair long enough to put in a pony tail. The reader is left to create Tuva in their own conjured image.

There are an eclectic group of characters in Dark Pines, from the hoarder, to the lonely taxi driver and the troll whittling sisters. All add to the story, driving it along to it’s satisfying conclusion.

I was also endeared towards Tuva when I saw her diet of digestive biscuits for breakfast, supplemented by Thai food and wine gums, which mirrored my own favoured food groups.

I had figured out quite early on in the story who the killer was. However it was fun to sit back and see the story unfold. And it allowed me to indulge in worrying about whether Tuva would submit her stories in time, would she ever remember to replace the batteries in her hearing aid and whether she’d have the whole case wrapped up in time to visit her mother.

Sometimes an author paints such a picture of the world their story is set in that the reader becomes enmeshed in it. I was rather disappointed to turn the final page and realise I was not actually stuck in the middle of a Swedish pine forest. Though this was of course tempered by the fact that I was also not in the crosshairs of a hunting rifle.

However, the book should come with a warning that it is extremely grippy. And that you’ll need some wine gums to eat whilst you read.

In Dark Pines Will Dean has created a vibrant, refreshing and engaging new protagonist and has firmly cemented himself as one of my new favourite authors. I impatiently await Red Snow, the next book in the Tuva Moodyson series. Highly recommended. Now where are those wine gums I bought… 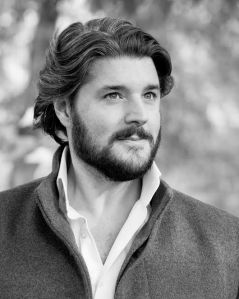 Will Dean grew up in the Midlands, living in nine different villages before the age of eighteen. He was a bookish, daydreaming kid who found comfort in stories and nature (and he still does). After studying at the LSE and working in London, he settled in rural Sweden. He built a wooden house in a boggy clearing at the centre of a vast elk forest, and it’s from this base that he compulsively reads and writes.