Rebecca Reid’s debut novel, Perfect Liars, is published by Transworld in ebook on 1 September 2018 and in paperback on 21 February 2019.

Rebecca kindly answered a few of my questions.

1. Tell us a little about Perfect Liars.

Perfect Liars is the story of three women who’ve been friends since childhood (even though they probably should have stopped being friends a long time ago) who are bound by a dark secret. It’s a bit like an adult British Mean Girls with murder.

I read Lord of the Flies at school (who didn’t?!) and my English teacher asked us if we thought it would be different with girls. All my friends said it would be more peaceful, but I was sure it would be a lot worse – just sneakier. So I decided to write a female take on Lord of the Flies, which eventually turned into Perfect Liars.

Around the time that I was writing it there was a lot of talk about male privilege, and I started wondering about the women behind male privilege, the sisters and wives of the men who run the world. And that’s who this book is about.

A bit of both, I think. I knew what the girls had done, and I knew that they’d do anything to protect their secret. But other twists and turns come naturally as I wrote, and occasionally a character would do something which surprised me. I always thought it was incredibly pretentious when I heard other writers say that, but it really does happen. Generally speaking I start writing at the beginning and write through, whereas lots of writers I know start in the middle, or even with the end.

So much of it was a surprise. I think the biggest one is how long it takes to go from a book being acquired by a publisher and being on the shelves. On TV it always seems to be a matter of weeks, but it’ll 11 months from acquisition to the publication of the eBook, and nearly 18 until the paperback is on shelves, and that’s fast! Lots of people have a 2 or three year wait.

I was also shocked at how much working with an editor made the process easier. I had worried it would feel odd to let someone inside my work and have to take their advice on it, but my editor is an angel and really does know best. Pretty much everything I’ve ever tried at her suggestion has been the right call. As a journalist I’m a nightmare to edit, always assuming I know best. But as a novelist I’m much more flexible.

I love to cook, so when my husband gets home we’ll have a glass of wine and I’ll talk to him about how the writing process is going while I make us something to eat, which is a really lovely nightly ritual. Otherwise, I spend a lot of my time telling myself I’ll go to yoga and meeting my friends at the pub instead.

Such a hard question! I think it’s a two way tie between Unsticky by Sarra Manning, which is honestly one of the best books ever written, or Rebecca by Daphne du Maurier which I have re-read once a year since I was 11 (and who I am named after!)

I was hoping someone would ask about how I get my hair so shiny but no-one has… Real blow to my ego that. On the writing front, I love reading about how writers write, so I can’t wait to talk more about that. For me, the trains are the best places in the world to work. I wrote most of Perfect Liars on various different trains, and now if I’m struggling to concentrate I’ll invent a reason to get on a long-ish train journey (two and a half hours is perfect) at a quiet time of day, and I know that will sort me out. 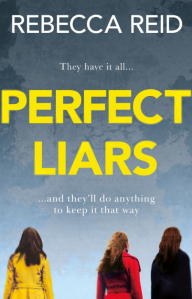 They have it all. And they’ll do anything to keep it that way.

For fans of The Girlfriend and Liane Moriarty as well as TV hits Doctor Foster and The Replacement.

Sixteen years ago, at an elite boarding school secluded in the English countryside, best friends Nancy, Georgia and Lila did something unspeakable.

Their secret forged an unbreakable bond between them, a bond of silence. But now, in their thirties, one of them wants to talk.

One word and everything could be ruined: their lives, their careers, their relationships. It’s up to Georgia to call a crisis dinner. – she knows there’s nothing that can’t be resolved by three courses in her immaculate kitchen.

But the evening does not go as planned.

Three women walk in to the dinner, but only two will leave.

Murder isn’t so difficult the second time around…

Gripping and unputdownable, Perfect Liars tells the story of a group of friends bound by their dark pasts and their desperate need to keep their secrets hidden from the world around them. How far would you go to protect the life you’ve built?

Rebecca is a freelance journalist. She is a columnist for the Telegraph Women’s section, works for Metro Online and has written for Marie Claire, the Guardian, the Saturday Telegraph, the Independent, Stylist, Glamour, the iPaper, the Guardian, Indy100, LOOK and the New Statesmen amongst others.

Rebecca is a regular contributor to Sky News and ITV’s This Morning as well as appearing on Radio 4’s Woman’s Hour, LBC, BBC News 24 and the BBC World Service to discuss her work.

She graduated from Royal Holloway’s Creative Writing MA in 2015 and Perfect Liars is her debut novel.

Rebecca lives in North London with her husband.