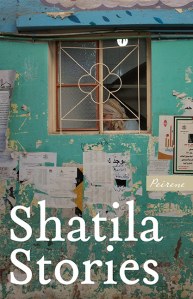 Most novels are written by professional writers using second hand material. Not this one. Peirene commissioned nine refugees to tell their ‘Shatila Stories’. The result is  a piece of collaborative fiction unlike any other. If you want to understand the chaos of the Middle East – or you just want to follow the course of a beautiful love story – start here.

Adam and his family flee Syria and arrive at the Shatila refugee camp in Beirut. Conditions in this overcrowded Palestinian camp are tough, and violence defines many of the relationships: a father fights to save his daughter, a gang leader plots to expand his influence, and drugs break up a family. Adam struggles to make sense of his refugee experience, but then he meets Shatha and starts to view the camp through her eyes.

The Shatila refugee camp in Beruit is not how one may imagine a camp. Instead of tents there are buildings, tightly packed together, some perpetually unfinished as they grow to accommodate the rising population. There are cafes, schools, community centres and bakers. It is populated by people who have escaped oppression and violence in the countries they were born in, and by those who have only ever known the camp. Nine of its residents have worked together to create Shatila Stories.

The novella follows Adam and his family, as they arrive in the camp. A series of interlinked stories follow Adam as he comes to term with his new home. His sister looks back at her marriage and re-evaluates her life. A father, not known for his kindness to his family, makes a drastic decision to save his only daughter and a drug dealer makes his mark on the camp. One day Adam walks into the community centre and meets Shatha. His life is changed irrevocably.

This is a short novel, only 120 pages, but nonetheless impacting. There is a sense that the reader is walking down the narrow alleyways of the camp. The sights and smells are almost within touching distance. The faint buzz of the live electricity cables can almost be heard overhead.  All of the authenticity is brought about by the fact that the various authors all reside in Shatila. It is eye-opening to read about a refugee camp that, I’ll admit, I didn’t know existed. And it has existed for years. The sense of limbo, perpetual estrangement with the rest of the country they reside in is inherent in the book.

This book is an informative, first person glimpse into a little known world and a worthy one.

There is tragedy in Shatila Stories. But there is also resilience, love, tenacity and hope. All of which are a necessary part of humanity. And if they can be found in the most trying of circumstances there is hope after all.

Why Peirene chose to commission this book

‘I want to hear their stories and see if their imaginations can open up a new path of understanding between us. Collaborative works of literature can achieve what no other literature can do. By pooling our imaginations we are able to access something totally different and new that goes beyond boundaries – that of the individual, of nations, of cultures. It connects us to our common human essence: our creativity. Let’s make stories, not more war.’ Meike Ziervogel

If you want to learn more about how this book came into being, please see our project page here.

Written by nine Syrian and Palestinian refugee writers.
Translated from the Arabic by Nashwa Gowanlock.

Nine Syrian and Palestinian refugees took part in a creative writing workshop run by Peirene in 2017 in the Shatila refugee camp in Beirut. Afterwards, the participants were commissioned to create a piece of collaborative literature. The group consists of six women and three men between the ages of 20 and 43. Most have arrived in Beirut from Syria over the last five years, and a couple are second and third generation Palestinian refugees who were born in Shatila. Their names are: Omar Khaled Ahmad, Nibal Alalo, Safa Khaled Algharbawi, Omar Abdellatif Alndaf, Rayan Mohamad Sukkar, Safiya Badran, Fatima Omar Ghazawi, Samih Mahmoud, Hiba Marei.

Omar Khaled Ahmad is Palestinian Syrian. He was born in 1998 in the Yarmouk camp in Damascus. In 2013 he fled the Syrian crisis and moved with his family to Shatila, Beirut. In 2016 he studied video journalism with the German Academy of the Deutsche Welle and now works for Shatila’s Campji, a youth media electronic platform for refugees. Omar has also directed a short film about life inside the Shatila camp.

Nibal Alalo is Syrian. She was born in 1975 in Deir el-Zour. She obtained a master’s in sociology and worked for eleven years as a psychosocial support worker with Iraqi refugees in Damascus. She moved to Beirut in 2015 because of the war and is now working with Syrian refugees in the Shatila camp.

Safa Khaled Algharbawi is Syrian. She was born in 1990 in Damascus and has lived in the Shatila camp since 2013. She has a higher national diploma in economics.

Omar Abdellatif Alndaf is Syrian. He was born in 1989 in Idlib, where he also obtained a diploma in aluminium and glass production. He fled to Lebanon in 2011. He loves Arabic poetry.

Rayan Mohamad Sukkar is Palestinian Lebanese. She was born in 1995 in the Shatila camp. She currently studies media at the Arab University of Beirut. In 2016 she completed a one-year course in video journalism with the German Academy of the Deutsche Welle and now works for Shatila’s Campji. She has also co-authored the play Tarah Bedda with the Ebaad organization and worked as an assistant director for a play at the American University in Beirut.

Safiya Badran is Syrian. She was born in 1986 and came to Beirut in 2011. She works for the NGO Basmeh & Zeitooneh in the Shatila camp.

Fatima Omar Ghazawi is Palestinian Lebanese. She was born in 1997 in the Shatila camp. She is currently studying psychology at the Lebanese University and is a freelance writer for the magazine Wammda.

Samih Mahmoud is Palestinian Syrian. He was born in 1998 in the Yarmouk camp in Damascus. He moved with his family to the Shatila camp in 2013. In 2016 he completed a one-year course in video journalism with the German Academy of the Deutsche Welle and now works for Shatila’s Campji.

Hiba Marei is Palestinian Syrian. She was born in 1987 in the Yarmouk camp in Damascus. For three years she studied psychology at the Faculty of Education in Damascus before the Syrian crisis forced her to move to Beirut in 2012. She now works as a tutor in adult education in the Shatila camp. Hiba also co-authored The History of the Puppet Theatre in Lebanese Arabic Theatre.

Nashwa Gowanlock is a British Egyptian writer, journalist and translator of Arabic literature. She is the co-translator with Ruth Ahmedzai Kemp of The Crossing: My Journey to the Shattered Heart of Syria by Samar Yazbek. Her translation of Abdelrashid Mahmoudi’s novel After Coffee is published by HBKU Press.

This was book 8 in my #20BooksofSummer challenge.