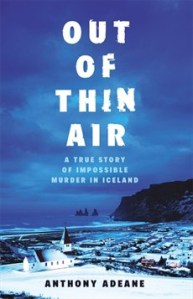 It is the most shocking miscarriage of justice in European history. And now – in the most stunning true crime narrative you will read this year – OUT OF THIN AIR spotlights Iceland’s strangest ever murder case.

Iceland, 1974. In two separate incidents, two men vanished into thin air. Then, out of it, came 6 murder confessions and 6 convictions. Yet, in the decades that followed, these too would dissolve…

One cold January night in 1974 a young man leaves a nightclub and is never seen again. Months later another man receives a telephone call late at night and leaves his home. He too never returns. One murder in Iceland is unexpected, two in short succession almost unheard of. Police are quick to arrest suspects. Confessions are obtained and convictions followed. But those confessions may not have been as they seem.

I’ve been lucky enough to visit Iceland. It is a wonderful country, with a close-knit feel. There is beauty in its stark landscape and a wonderful sense of history permeates it. This essence of Iceland leaps from the pages of Out of Thin Air. There is something mysterious and slightly magical about the country and the book echoes that. (It was also great to read a book where I recognise the places and have actually been to them).

As well as being a fascinating look into Icelandic life, Out of Thin Air is a study in how criminal investigations shouldn’t take place. Forty something years ago investigative methods were different to today’s policing. Unfortunately violence was rife, as was the use of more persuasive tactics to elicit confessions. Add into the mix a police force unused to dealing with major investigations such as murder and it was a recipe for disaster.

Many of those who were involved in the case, including those convicted, remain in Iceland. They have had to live under the shadows of events from over forty years ago, each one dealing with it in their own way. I found myself searching the internet for more information on the six suspects. It was truly fascinating to read about what they went through, and how they dealt with the fallout of the case. The book looks into investigative methods, of both the Icelandic police and the German investigator sent to assist. It is a study in detection at the time, and the limits placed by lack of experience. It is also a study in the phenomenon of false confessions, of suggested memory and the effect that solitary confinement can have on the human mind.

The book reads very much like a documentary, which is apt given the author, Anthony Adeane was researching the case for a documentary. Interviews with those involved form the bedrock of the book, bringing the cases even more to life. As with most non-fiction crime books there is a sense of unease in that the complete truth will never be fully known. But such is life.

It’s hard to not go into too much detail without giving anything away, so I will leave it there.

The cases of Guðmundur and Geirfinnur still causes much discussion in Iceland today. And it’s easy to see why. A fascinating look into a dark part of the country where the Northern Lights shine.

Anthony Adeane is a journalist based in London.

He pitched the idea for a documentary about the Guðmundur and Geirfinnur disappearances to an independent production company in Autumn 2014 and then worked with them over the next three years, travelling back and forth to Iceland to conduct interviews with those involved, and to learn more about this fascinating country.

He has since built up a vast network of contacts, including the main suspects, the police who first investigated the disappearances, and the journalists who made their names with this story.

When he is not writing about bizarre Icelandic disappearances, he can be found working at the BBC as a current affairs producer.

This was book 7 in my #20BooksofSummer challenge.