Helen Matthews debut novel, After Leaving the Village, was published by Hashtag Press on 12 October 2017.

Helen kindly answered a few of my questions.

1. Tell us about After Leaving the Village.

In a remote Albanian village, seventeen-year old Odeta feels trapped in her routine existence – working in her father’s grocery store. It seems as if nothing interesting will ever happen to her again. Them, one day, an enigmatic stranger walks into the shop and tells her about exciting career opportunities in London. But when Odeta steps off the plane, she enters a strange and terrifying world she could never have imagined.

Journalist Kate lives on the same London street and is desperate to wean her young son off technology and online gaming which, she believes, is stunting his emotional capacity for friendship. She imposes an extreme digital detox on her family which leads to conflict with her husband. Kate sets out to build a community in her London neighbourhood to try to recreate for her son a version of her own childhood in a village in Wales. Kate and Odeta’s stories collide towards the end of the novel in a dramatic climax.

After Leaving the Village is a suspense thriller, rooted in contemporary society, where few of us know what goes on behind the closed doors of our neighbours. It’s proving popular with book groups because there are multiple themes to discuss, including human trafficking, modern slavery, other forms of exclusion, digital detox and community.

My starting point was Kate’s story and I was exploring what would happen if a family is cut off from the internet and social media. As I researched different forms of exclusion, I tried to imagine what it would be like to be forcibly cut off from everything and this led me to research human trafficking and modern slavery. I was fortunate to discover an amazing charity called Unseen, that works towards a world without slavery. They answered my questions and their managing director fact-checked the novel. She was sufficiently impressed with the authenticity and sensitivity of my story that she offered to write a foreword. More recently, I’ve been appointed an ambassador for Unseen and, when I give talks about my novel, I take the opportunity to raise awareness of the evils of modern slavery in our towns and cities. I also donate a percentage of my royalties to Unseen.

I usually begin with a broad plot outline and a few notes about my main characters. Next, I do some initial research before writing a few chapters to check the story ‘has legs’ and that the characters will come to life on the page. My research for After Leaving the Village included travelling to Albania to check that I’d portrayed the way of life accurately.

That the whole process takes so long! At a time when deferred gratification is no longer a thing and we expect everything to happen instantaneously, parts of the publishing industry seem to work at the speed of the nineteenth century. I’m not saying that faster is always better, of course, and the traditional end of the industry is slowly adapting to the challenge of self-publishing by introducing digital imprints.

When I was agent-hunting, I (wrongly) assumed it would be unethical to make multiple submissions if an agent had requested my full manuscript. But waiting for an agent or small publisher to get back to you takes so long that years can go by with little to show for it.

I do some occasional freelance copywriting, mainly on topics of employee benefits and human resources, where I have expertise from my time working for large companies.

When writing, it’s easy to spend all day in front of the keyboard so I love to get outdoors – cycling and walking. Travel is my passion – I’ve just returned from a week in Stockholm and Helsinki, both cities were fantastic but terrifyingly expensive. In Helsinki a G&T cost 16 euros and an ordinary bottle of house wine was 40 euros, so we were forced to give our livers a bit of a holiday, too. When I return from a trip, I often post a blog about my travels on my author website. Here’s a link to one about Albania. https://www.helenmatthewswriter.com/post/albania-beyond-the-bunkers

This is a tough question! I think it would have to be a complex novel with masses of characters and themes, so I’ll probably go for Tolstoy’s War and Peace. I read it years ago when I seemed to have more time for vast books. I remember one of my university professors saying that War and Peace was only the second best novel ever written and was flawed. But he wasn’t disrespecting Tolstoy because, in his opinion, the perfect novel was Anna Karenina. As a writer, I think I will learn more by searching for the flaws.

As someone who has taken a long time to become a published author I expected to be asked ‘How does it feel?’ The answer is – it feels fantastic! For a while after signing my contract, I would wake up in the morning thinking I’d had a dream that my book was being published. And then it would slowly dawn on me that this was actually happening. It wasn’t a dream! 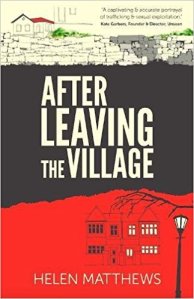 Odeta’s life has shrunk to a daily round of drudgery, running her father’s grocery store in a remote Albanian village. One day a stranger from Tirana walks into the shop and promises her a new career in London.

Odeta’s life is about to change, but not in the way she expected.

Journalist Kate lives on a quiet London street and seems to have a perfect life but she worries about her son Ben, who struggles to make friends. Kate blames the internet and disconnects her family from the online world so they can get to know their neighbours.

On a visit to her home village in Wales, Kate is forced to confront a secret from her past. But greater danger lies closer to home. Perhaps Kate’s neighbours are not the friendly community they seem.

Helen Matthews is the author of debut novel ‘After Leaving the Village’, winner of the Winchester Writers’ Festival prize for opening pages of a novel. Born in Cardiff, she read English at the University of Liverpool. After travelling, she worked in international development, consultancy, human resources and pensions management but fled corporate life to pursue her dream of becoming a writer. She holds an MA in Creative Writing from Oxford Brookes University.

Helen has been awarded prizes for short stories and published in the literary journal Artificium. As a freelancer, she writes content for websites and business magazines and has, in the past, been published in The Guardian and had columns broadcast on BBC radio.

She is married with two grown-up children and lives in Hampshire.

For more on Helen Matthews: