I’m part of a online community called Book Connectors where bloggers, reviewers and authors can discuss all things book related. During one of the threads there was mention of ‘quiet’ books, the ones that miss out on the big publicity push. It was agreed that it was such a shame that certain books weren’t as widely read, as the reading public were missing out on hidden gems. So that sparked a germ of an idea and I decided to do a series of posts highlight titles that myself and other bloggers and authors feel may have gone under the reader’s radar. (That was the working title for this series of posts and as inspiration hasn’t struck me with anything better, its the one I’m going with for now).

First up is Raven Books, in Blackrock, Ireland. (You can read more about them here.)

They have suggested Evie Wyld’s All The Birds, Singing, published by Vintage.

Jake Whyte is the sole resident of an old farmhouse on an unnamed British island, a place of ceaseless rains and battering winds. It’s just her, her untamed companion, Dog, and a flock of sheep. Which is how she wanted it to be. But something is coming for the sheep – every few nights it picks one off, leaves it in rags.

It could be anything. There are foxes in the woods, a strange boy and a strange man, rumours of an obscure, formidable beast. And there is Jake’s unknown past, perhaps breaking into the present, a story hidden thousands of miles away and years ago, in a landscape of different colour and sound, a story held in the scars that stripe her back.

Here’s what they have to say:

” [It] was one of my top three reads last year. A superb, chilling tale alternating between a cold, sodden isolated sheep farm on an island off the English coast, and the scorched, barren landscape of Australia. The journey of the protagonist, Jake, is handled with skill, compassion, and suspense.”

The second shop to recommend a quiet novel is Belgravia books, in London. (You can read more about them here.)

They have suggested The Queen’s Gambit by Walter Tevis, published by W&N. 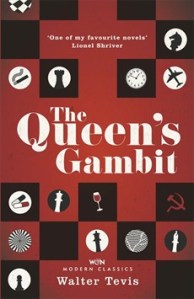 When she is sent to an orphanage at the age of eight, Beth Harmon soon discovers two ways to escape her surroundings, albeit fleetingly: playing chess and taking the little green pills given to her and the other children to keep them subdued. Before long, it becomes apparent that hers is a prodigious talent, and as she progresses to the top of the US chess rankings she is able to forge a new life for herself. But she can never quite overcome her urge to self-destruct .

For Beth, there’s more at stake than merely winning and losing.

Here’s what they have to say:

“I was urged to read this myself by several of my colleagues and I feel duty bound to make as many people as possible read this in turn. It is utterly, utterly terrific. The story of Beth, an orphan who learns to play chess and starts to compete nationally and internationally; the story follows her early life, and while at times it can seem depressing it never quite goes where you expect it to, and the passages of her chess-playing are quite weirdly but brilliantly thrilling, whether you ‘get’ chess or not.”

So there we have it, two more books I’ve not read and that had passed me by. Have you read either of the suggested titles? Do you have a quiet book you’d like to shout about?