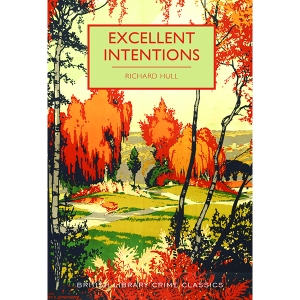 “From the point of view of the nation, it’s a good thing that he died.”

Great Barwick’s least popular man is murdered on a train. Twelve jurors sit in court. Four suspects are identified – but which of them is on trial?

This novel has all the makings of a classic murder mystery, but with a twist: as Attorney-General Anstruther Blayton leads the court through prosecution and defence, Inspector Fenby carries out his investigation. All this occurs while the identity of figure in the dock is kept tantalisingly out of reach.

Launcelot Henry Cuthbert Cargate, or Henry Cargate to his enemies, is found dead on the train to London. His death was not mourned by anyone, given he was the least popular man in the village of Larkingfield. Someone has been arrested and is being tried for his murder but the identity of the accused is not revealed. Who did Inspector Fenby arrest, and will prosecution counsel Anstruther Blayton argue his case well enough for a conviction?

There’s been a murder. And the accused is on trial. All well and good but the reader doesn’t know which of four suspects is on trial. Now with a premise like that this book almost begs to be read.

This was a fun, unusual take on a crime novel, and I can see how innovative it was for its time. I had a great time reading the progression of the case, meandering backwards and forwards through time whilst information and clues were drip fed. I could easily see this being adapted for television. I get the impression that Richard Hull had great fun writing it and how it would have been a challenge to the genre norms at the time (as it still is, to an extent, today).

There are quite a few characters introduced at once and it takes a little time to sort them out. That done the story progresses well, with scenes from court interspersed with Inspector Fenby’s investigations, the judge’s summing up and the jury deliberations. There is a closed room feel to the novel, given the limited number of suspects.

I had guessed who was in the dock before it was revealed. However there are no real red herrings or false turns, no big twists you won’t see coming. The clues are laid out for the reader to find, just as they are there for Inspector Fenby to detect.

What I love about these British Library Crime Classics is that they all take you back in time. I could imagine the country house and village scenes. I could also imagine the hubbub this book could have caused when it was first published in 1938. The more I read of these books the more I see how crime writers from the first half of the last century played with the genre rules, stretching them and breaking them (Agatha Christie is perhaps the most famous example of a literary rule breaker) and paving the way for the modern writers to do the same.

The ending was particularly good and I turned the last page with a wry smile on my face.

A throughly enjoyable way to spend a few hours. The verdict is in – recommended.

This was book 1 in my #20BooksofSummer 2018 reading challenge.