Lev Parikian is the author of Waving, Not Drowning. His latest book, Why Do Birds Suddenly Disappear? was published by Unbound on 17 May 2018.

Today he dicusses publishing with Unbound.

When Dr Johnson compiled his Dictionary in 1755, he inevitably missed out a few words – as fans of 1990s sitcom Blackadder will remember.

One of the words missing from that first dictionary will have been ‘crowdfunding’, because such an expression didn’t at the time exist. But the idea most certainly did – that was more or less how the Doctor’s great work came into being, commissioned by a consortium of booksellers frustrated by the low quality of existing dictionaries. Another example of subscription publishing, from the previous century, was Milton’s Paradise Lost, which listed the names of the 500 people who had paid in advance to bring the book to existence.

The concept of subscription publishing was basically the same as the idea made popular in recent years by Kickstarter and other websites, and adapted to great effect in the book world by crowdfunding publishers Unbound: readers provide money up front for a book – when it reaches its funding target, it can then be made. The money raised covers the cost of producing the special ’subscribers’ edition’, which, as shown in these photos of my own Unbound book, Why Do Birds Suddenly Disappear?, is that bit nicer than the already pretty nice trade edition which will appear in the shops. 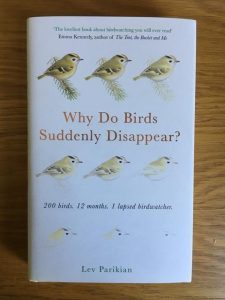 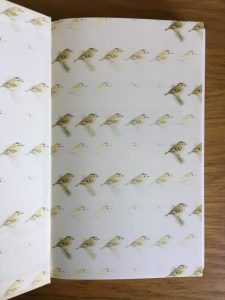 For the writer, Unbound offer a different route to publication than the ‘traditional’ model. While they by no means take on every project submitted to them (they are emphatically not a vanity publisher), they do have an eye for the unusual, the out-of-the-way idea that might not find traction elsewhere. And if a writer is confident enough to go cap in hand to the world and say ‘please support this thing that doesn’t actually exist yet’, they can build a valuable ‘street team’ of loyal fans who are invested (financially and emotionally) in the book from the very outset.

But it’s not for the faint-hearted. It takes a bit of chutzpah to email people out of the blue asking for money. ‘Hello! We haven’t seen each other for fifteen years, but how are you? Oh and by the way can I have twenty-five quid for a book that isn’t written yet?’ Luckily my ‘day’ job is as an orchestra conductor, so chutzpah is almost my middle name. And I have some very generous friends, so while the campaign wasn’t without its highs and lows, we hit the target exactly three months after launch (about par for the course) – and two years after my initial pitch, the book is in the shops.

For the reader, Unbound offer a chance to be involved with a book from its inception through to publication. I’ve supported several Unbound books (some of them are very good indeed) and there’s undeniably something special about knowing you’ve played a part in bringing a book into existence. And their willingness to publish books that other publishers might not be willing to take a risk on lends their list a pleasing variety. They’ve also recently launched the Unbound Reading Club, which offers free P&P and a free ebook every month, as well as other goodies. It’s well worth joining for anyone who likes reading and being in clubs.

You can read more about Unbound in this excellent interview with co-founder John Mitchinson. And browse their list here. 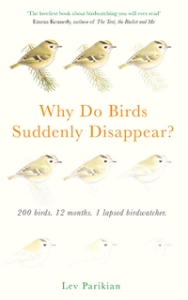 At twelve years old, Lev Parikian was an avid birdwatcher. He was also a fraud, a liar and a cheat. Those lists of birds seen and ticked off? Lies. One hundred and thirty species? More like sixty.
Then, when he turned fifty, he decided to right his childhood wrongs. He would go birdwatching again. He would not lie. He would aim to see two hundred species of British bird in a year.

Why Do Birds Suddenly Disappear? is the story of that year, a story about birds, family, music, nostalgia, the nature of obsession and obsession with nature. It’s about finding adventure in life when you twig it’s shorter than you thought, and about losing and regaining contact with the sights, sounds and smells of the natural world.

It’s a book for anyone who has ever seen a small brown bird and wondered what it was, or tried to make sense of a world in which we can ask, ‘What’s that bird?’ and ‘What’s for lunch?’ and get the same answer.

Lev Parikian is a conductor, writer and hopeless birdwatcher. His first book, Waving, Not Drowning, was published in 2013. His numerous conducting credits include the re-recording of the theme tune for Hancock’s Half Hour for Radio 4. As a birdwatcher, his most prized sightings are a golden oriole in the Alpujarras and a black redstart at Dungeness Power Station. Lev’s book, Why Do Birds Suddenly Disappear?, can be bought on Amazon or Hive. He is currently crowdfunding his second Unbound book, the long and the short of it, a collection of forty pieces of writing in which the readers get even more control of the process by supplying subjects for Lev to write about.’