Ruth Mancini is the author of The Lies You Tell and His Perfect Lies. Her latest novel, In the Blood was published in ebook by Head of Zeus on 1 May 2018 and is published in hardback on 9 August 2018.

Ruth tells us more about her book.

Tell us a little about your background. What influenced you to write?

My mother is English, my father Mauritian. My parents separated when I was 5 and my dad then died when I was 15. My grandfather was a French/Italian landowner in Mauritius. His name was Gustav Mancini. I never knew him or my grandmother – she was a field worker. They never married and she was very poor. We were also very poor as kids and spent a few years living in a caravan. They didn’t have food banks in those days, but we used to go pea-picking to earn money, which we’d then spend on food. We were still quite small, but I remember, we were allowed to buy whatever we wanted with our own earnings as long as it was edible. That made it fun and empowering. I always chose bread and cheese. My little brother always chose tomato soup, but he once got a can of baked beans by mistake because he was too little to read the label. He was very upset. My mother likened our situation to the novel The Railway Children, although for us it was aeroplanes, not trains. Our caravan site was right next to what was then a very small Stansted airport and my two brothers and I regularly sat on a fence and waved at the planes as they took off. We also played the Glad Game, like Pollyanna. My mother had taught me to read when I was 3, and from that moment onwards my nose was always in a book. My mother also loved books and we enjoyed pretending our life was one big story – a book or a movie. So, I suppose the stage was set quite early on for me to start writing stories of my own.

What are the key themes of your books?

They always involve a strong female character fighting for justice, either for herself or for someone else. The central character in In the Blood is a criminal defence lawyer named Sarah Kellerman. She has a mystery to solve, however there’s a bit of a window into her personal life as well. Sarah is the single mother of an autistic and severely learning-disabled child. She is a good and dedicated lawyer who is caring and empathetic with the people she represents, however her boss and co-workers think she gets too involved with her clients and they don’t understand (or care much) about her personal difficulties. She struggles with lack of sleep and sometimes makes mistakes as a result. Ultimately, though, her passion and drive to see justice done for those she represents wins through.

Where did you get your inspiration for the story?

The inspiration came from a real-life infant murder case in which I was fleetingly involved. Like Sarah, I’m a criminal defence lawyer. I love my work, so still practise and combine that with my writing. I also have a severely autistic and learning-disabled child. Life has been pretty full-on, to say the least, and so there has been plenty to draw on.

What kind of research do you do?

I research everything thoroughly. I rely mostly on good old Google, but I always do site visits where I can and talk to colleagues and friends – or friends of friends – who have experience in other professions. I have some lovely friends and colleagues, in fact, a number of whom did a beta-read of earlier drafts of In the Blood and gave me some hugely important feedback. I’m a little embarrassed about the acknowledgments section of In the Blood, actually, as it’s three pages long. My husband says it’s like one of those Oscars speeches that goes on forever and everyone’s sitting there outwardly smiling and inwardly rolling their eyes. But I really wanted to acknowledge the help I got, in particular from the amazing people who have looked after my son and still do. I know better than anyone what hard work that can be. Seriously, without their help, I’d have gone under. And I didn’t want to take all the credit and look like some kind of superwoman who can do it all – because I most definitely am not! 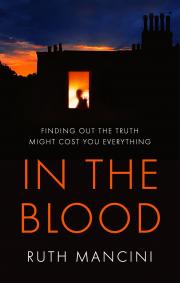 In southeast London, a young mother has been accused of an unthinkable crime: poisoning her own child – and then leaving him to die.

The mother, Ellie, is secretive and challenging – she’s had a troubled upbringing – but does that mean she’s capable of murder?

Balancing the case with raising her disabled five-year-old son, criminal defence lawyer Sarah Kellerman sets out in desperate pursuit of the truth. But when her own child becomes unwell, Sarah realises she’s been drawn into a dangerous game.

Unsettling and compulsive, In the Blood is a chilling study of class, motherhood and power from a new star in crime fiction.

Ruth Mancini is a criminal defence lawyer, author and freelance writer. She lives in Oxfordshire with her husband and two children.