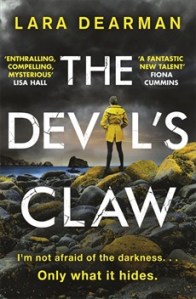 Following a traumatic incident in London, Jennifer Dorey has returned to her childhood home in Guernsey, taking a job as a reporter at the local newspaper.

After the discovery of a drowned woman on a beach, she uncovers a pattern of similar deaths that have taken place over the past fifty years.

Together with DCI Michael Gilbert, an officer on the verge of retirement, they follow a dark trail of island myths and folklore to ‘Fritz’, the illegitimate son of a Nazi soldier. His work, painstakingly executed, has so far gone undetected.

But with his identity about to be uncovered, the killer now has Jennifer in his sights.

Jenny has moved back home to Guernsey after the death of her father and a traumatic experience in London. She works as a reporter for the local newspaper and whilst out on assignment comes across the body of a young girl. Her investigation into the girl’s death leads her to links to other deaths over the last 50 years. With DCI Michael Gilbert she discovers that a serial killer may have been hiding in plain sight on the island for over half a century.

I loved the setting of the novel. The island location helps to add a layer of claustrophobia, despite the beautiful landscape. It was the threat of being on a relatively small geographical area with a serial killer that made the story seem like that it was a closed room mystery.

There are a variety of characters, all of them adding to the story. Michael is tenacious, principled and still haunted by the loss of his daughter. He is driven by her death to find the truth about the drownings. He works well with Jenny who is also a determined character and not just because of her journalist background. The two have both lost loved ones to the sea and this shared trauma helps them to bond. The fact that Jenny isn’t bound by the same procedural restrictions as Michael also makes them a good team.

The unique political and historical background for the island was fascinating and added a richness to the story. I had guessed the identity of the killer before the reveal but it was still fun to read how Jenny and Michael come to the same conclusion. There were some parts of the story that seemed a little long, though I put this down to the fact that I had identified the culprit and was waiting for the characters to catch up, and the pace picked up as the story progressed to it’s conclusion.

An enjoyable introduction to Jenny and Michael. I’m looking forward to reading more from Lara Dearman in the future.

Lara Dearman grew up on Guernsey before moving to the UK to study. She pursued a career in the city before taking time out to be with her young family. After her husband’s job took the family to Singapore for three years, they returned to London where she studied for an MA in Creative Writing at St Mary’s University. She graduated with a distinction in 2016. Lara now lives in New York with her husband and three children and is intending to write full time. Lara will be in London for a month over the summer and plans to spend plenty of time this side of the Atlantic each year.