Catherine Isaac is psydonym of Jane Costello whose books include The Nearly-Weds, Bridesmaids, All the Single Ladies and Summer Nights at the Moolight Hotel. Her first book written under the name of Catherine Isaac, You, Me, Everything, was published by Simon and Schuster on 19 April 2018.

She kindly answered a few of my questions.

1. Tell us a little about You Me Everything.

Single mother Jess takes her ten-year-old son William to the Dordogne in France to rekindle a relationship with his father Adam, from whom she’s estranged. The prospect of spending a summer with her ex is Jess’s idea of hell, even if it does mean staying in a cottage in the grounds of Chateau de Roussignol, the luxurious hotel he runs. But she is driven to fulfil the wishes of her mother, Susan, who is in the late stages of Huntington’s disease and believes strongly that William should have a relationship with his dad. I’ve come to think of ‘You Me Everything’ as a love story in the widest definition of the term. It’s about love at its worst and best, but most of all, it’s about finding every bit of joy in life, no matter what is thrown at you.

I had the initial idea after the mother of someone I know was diagnosed with HD and I was struck by the ripple effect of this devastating condition. But I aimed to tackle what was inevitably a difficult topic with a lightness of touch. I wanted to make readers laugh as well as cry, to escape with Jess to the glorious sun-drenched south of France and ultimately deliver an uplifting message.

Definitely a planner. I tried ‘winging it’ for years before I became a published author and am convinced that’s why it took me so long to actually finish a novel! I’d get to chapter 3 and be tied up in knots, lost as to where the plot was heading. In my experience planning allows you to inject twists and surprises into a novel, which I consider an essential ingredient of the books I write. It’s also a good way of keeping writer’s block at bay.

4. Having been through the publishing process a number of times is there anything about the process of creating a novel that still surprises you?

How difficult it still is! I think I’d assumed that I’d find it easy after writing ten books, but in many ways it only becomes more of a challenge. I think the main reason for this is that I feel driven to improve with every book, to tackle subjects I once would’ve been too scared to touch for fear that I wasn’t capable of doing them justice.

Also, I’ve learnt over the years that to write something really good you’ve got to pull it to pieces first and make sure it stands up to the most rigorous scrutiny. All of which amounts to an immensely fulfilling but sometimes pretty tough experience.

5. You also write under the name Jane Costello. What do you find are the benefits of writing under a different name?

The main benefit has been to send a clear message that You Me Everything is a different, more ambitious, sort of book from the romantic comedies I wrote. By doing so it attracted the kind of opportunities that never came my way previously, such as being published in the USA for the first time and being optioned for a movie by Lionsgate and Temple Hill. That’s been hugely exciting for me, but I’m still getting used to signing my new name!

I’ve got three sons – aged 13, 9 and 5 – so ‘relax’ isn’t a word that features heavily in my vocabulary. But I do try to make time to go running at least a few times a week; not only does it keep me sane when under pressure, it’s also when my best ideas seem to materialise. I also love the Lake District and visit at least once a month, come rain or shine, to climb mountains and curl up in front of a roaring fire in one of my favourite pubs.

A tricky one as I feel as if I’ve been asked everything, but how about this:-

Q: Is there a location where you’d like to set a novel that you haven’t so far?

A: Norway. I love travelling so enjoy writing novels set outside the UK. I did my first book tour for You Me Everything in Norway and really fell in love with the country and its people. Plus, when people think of Scandinavia as a setting for fiction they automatically associate it with thrillers. But there’s such a cool beauty to the place that I think there’s another type of book to be written there. One day …

You can read my review of You, Me, Everything here. 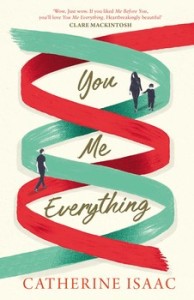 Jess and her ten-year-old son William set off to spend the summer at Château de Roussignol, deep in the rich, sunlit hills of the Dordogne. There, Jess’s ex-boyfriend and William’s father, Adam, runs a beautiful hotel in a restored castle. Jess is bowled over by what Adam has accomplished, but she’s in France for a much more urgent reason: to make Adam connect with his own son. Jess can’t allow Adam to let their son down because she is tormented by a secret of her own, one that nobody – especially William – must discover. 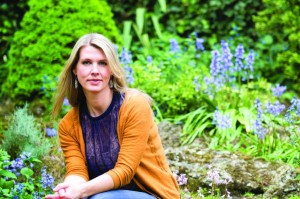 Catherine Isaac is the pseudonym of the British Sunday Times bestselling author Jane Costello. Her new novel You Me Everything will be published in the UK and in the US in early 2018.