Kristen Lepionka is the author of The Last Place You Look which introduced PI Roxane Weary . Her latest novel to feature Roxane is What You Want to See, published by Faber on 3 May 2018.

Kristen kindly answered a few of my questions.

1. Tell us a little about What You Want to See.

Roxane Weary’s newest case starts out as an investigation into whether a man’s fiancée is having an affair. She’s not—but she does have some pretty wild secrets, which come tumbling out when she’s murdered in what appears to be a mugging.

I got started by thinking about secrets and the ways that people deceive each other, though this is really the basis of most mysteries (so-and-so has a secret—now what?) I was especially interested in people who survive by conning others out of money, property, etc. Stealing is one thing, but lying to someone’s face in order to get them to give you want you want without question—that’s a different kind of cold.

A little bit of both. I like to have a general idea of where I’m going (otherwise I tend to get very, very off-track and write thousands of words that have to be scrapped) but I still like to leave some of it to chance. Even though I “created” my characters, they feel more like people I’ve gotten to know who let me follow them around to see what they do. So the story is often dictated by that. For example, the character of Catherine, who was in my first novel, sort of barged into What You Want to See—I had not intended to put her in the story at all, but there she was.

I think every story is kind of a surprise, because writing often takes me places I didn’t expect to go. As for publishing, I’ve been (pleasantly) surprised by how warm and wonderful other writers in the crime fiction world are.

I’m also a graphic designer, so I spend a fair bit of time doing that—not exactly relaxing. When it’s time to unwind, I occasionally knit, watch basketball on television, hang out with my cats, and, of course, read.

Probably The Driftless Area by Tom Drury. It’s part noir/crime fiction and part ghost story, and I’ve read it dozens of times already and never get tired of it.

Shaken by the outcome of her last big case, PI Roxane Weary is keeping a low profile. When she takes on a new client who suspects his fiancée is cheating on him, Roxane is happy to have landed a run-of-the-mill surveillance job. Until, that is, Marin Strasser, the woman she’s been tailing, turns up dead.

The police are convinced her client is the one who pulled the trigger. Certain – and scared – that things aren’t so straightforward, Roxane starts to follow a paper trail that gets more dangerous the farther it goes.

So who really was Marin Strasser? Who could have wanted her dead? And how can Roxane stop her work from once again pushing away the few people she thinks she can trust? 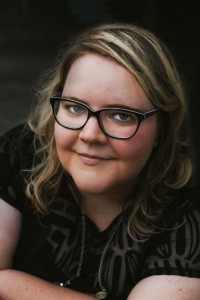 Kristen Lepionka grew up mostly in a public library and could often be found in the adult mystery section well before she was out of middle school. Her writing has been selected for Shotgun Honey, McSweeney’s Internet Tendency, Grift, and Black Elephant. She lives in Columbus, Ohio, with her partner and two cats.