Peter Swanson is the author of the LA Times book award nominated The Girl With a Clock for a Heart, the Ian Fleming Silver Dagger shortlisted The Kind Worth Killing and Her Every Fear. His latest novel, All the Beautiful Lies was published by Faber on 5 April 2018.

Peter kindly answered a few of my questions.

1. Tell us a little about All the Beautiful Lies.

I think of it as two stories that converge into one. In the first story a recent college graduate named Harry Ackerson moves in with his stepmother after his father’s death, and discovers that his father led a secret life. In the other story we follow his stepmother, Alice Moss, going back to when she was a teenage girl, and the events that turned her into the adult she becomes.

One of my inspirations was monster movies, the idea that immortality can be achieved by sucking life from the young. None of this is literalized in the novel, but it was always at the back of my mind. Monsters are created by other monsters, and that is what the book is about. Well, one thing it’s about anyway. I was also inspired, as I always am, by location. This time it was the chilly windswept coast of Maine.

Definitely the latter. I begin with a premise, then I add characters, and a location, and I just go from there and see where it takes me. I will admit that I do often have the ending in mind when I start, but it does sometimes change. No, let’s be honest, it always changes. And that’s a good thing.

4. Having been through the publishing process a few times is there anything about the process of creating a novel still surprises you?

How hard it is, and how hard it continues to be. You would think that having written a novel (or several) before would make the next one easier but it’s simply not the case. Each time you start you have to build a world up from scratch. And the tricks you learned on your previous novel don’t always help you on the new one.

I recently took up oil painting in an attempt to pull my eyes away from computer screens and television screens and phones. Just screens, I guess. I have no ambition to be a great painter but something about the creative act of putting paint on canvas is so different from writing, and so satisfying in a singular way.

That’s easy. I would read Lucky Jim by Kingsley Amis, even though I’m usually partial to novels that include murders in them. But Lucky Jim makes me laugh out loud, even when I know the jokes are coming, and if I had to read only one book for the rest of my life then it might be good to laugh. 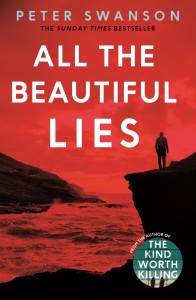 On the eve of his college graduation, Harry is called home by his step-mother Alice, to their house on the Maine coast, following the unexpected death of his father.

But who really is Alice, his father’s much younger second wife? In a brilliant split narrative, Peter Swanson teases out the stories and damage that lie in her past. And as her story entwines with Harry’s in the present, things grow increasingly dark and threatening – will Harry be able to see any of it clearly through his own confused feelings?

Peter Swanson’s debut novel, The Girl With a Clock for a Heart (2014), was described by Dennis Lehane as ‘a twisty, sexy, electric thrill ride’ and was nominated for the LA Times book award. His follow up The Kind Worth Killing (2015), a Richard and Judy pick, was shortlisted for the Ian Fleming Silver Dagger, was named the iBook stores Thriller of the Year and was a top ten paperback bestseller. He lives with his wife and cat in Somerville, Massachusetts. His third novel, Her Every Fear, was be published in early 2016.