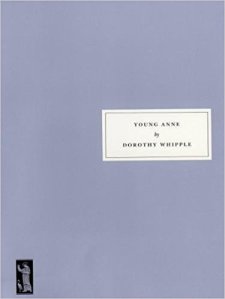 Young Anne follows the life of Anne Pritchard from a young girl of five to a grown woman in her early twenties. The story shows Anne’s early years, her time at school, falling in love and her first job. There are highs and lows dealt with compassionately and with a deftness of hand that makes the story feel all the more true. This is a story about a life. There are no great reveals, action scenes or taut moments. It could be said that nothing much happens but Dorothy Whipple wrote in such a way that she made the reader invested in the characters. She wrote about growing up, about finding your feet, about first love and relationship issues in such an engaging, often lively, way that the reader can’t help but be drawn into the story. Anne’s life has a similar arc to Dorothy’s and the tone of the novel shows that sometime Anne and Dorothy  are almost one person. This sense of connection between creator and creation adds a weight to the story, making the reader all the more invested in the story.

Anne starts out as a simple character but as the story progresses the reader sees a more complex persona, one who is coming to terms with the changes in her circumstances. She doesn’t have a particularly loving upbringing, with a strict father and a rather uninterested mother. The love she finds in the family maid, Emily, who remains a constant throughout the novel. We see that Anne has flashes of frustration at her position in society, for example she wonders at one point why she must be the one to fold laundry and pick up after her brothers, why it was perceived as women’s work, as it was at that time. Later there are moments of quiet, understated romance, of expressions of feelings that could almost pass the young protagonist by, but which are told by an older, perhaps wiser woman in a way that shows the underlying intentions of the person behind those acts. They have weight to the story, one which becomes more apparent as the tale progresses.

Anne is not always a likeable character. There are times when her actions show her naivety, an impetuous nature that has laid dormant for a long time. It is as she gets older that we see more growth from Anne, and the pains that go with it.

There are flashes of humour throughout, with some standout lines of prose that hint at the strength of work that could still be expected after this debut novel. Some of the text is so brilliant in its simplicity of manner that it requires an immediate re-reading to take in the insight and wit at work, and which resonate still today.

The story is filled with simple, yet not simplistic prose, a character study of people and of a time which are still relevant and interesting today. Young Anne was my first foray into the writing of Dorothy Whipple.  It will not be my last.