Today I’m pleased to welcome Louise Candlish to the blog. Louise is the author of eleven novels including The Swimming Pool, The Sudden Departure of the Frasers, The Disappearance of Emily Marr, The Island Hideaway, The Second Husband and Other People’s Secrets. Her latest novel, Our House, was published by Simon and Schuster on 5 April 2018.

Louise kindly answered a few of my questions.

1. Tell us a little about Our House

Our House is a domestic noir thriller about property fraud. As far as I know, it’s the first novel to explore this crime, so I feel slightly like a whistleblower. Fi and Bram Lawson have separated but continue to share the family home they own and take turns there with their two sons. A catastrophic mistake on Bram’s part leads him to sell the house without Fi knowledge. That’s not a spoiler – you learn this right at the beginning.

I was inspired by an article I read in the Daily Mail about a woman who’d almost been the victim of a property scam. I then read voarciously about those who weren’t so lucky. I was also excited by the idea of bird’s nest custody and I thought I knew a way to bring the two themes together. The structure of Our House is quite innovative – it was inspired by podcasts and audio interviews generally. It’s a fascinating form, so intimate, just the speaker and the listener. It’s about persuasion and trust.

I always plan as much as I can, simply for efficiency’s sake. With a very complicated structure like this, I had to plot thoroughly and then still be prepared to throw the pieces up in the air and see if they landed anywhere better. It was the most mind-bending thing I’d done.

4. Having been through the publishing process a number of times is there anything about the process of creating a novel that still surprises you?

Definitely. Every novel feels like a reinvention of the wheel because I’m trying something new each time, either in theme or structure or both. So I’m always surprised by how hard it is, how I’m not finding it easier even though I’m more experienced now. I’m not Jack Kerouac, pouring out On the Road in one miraculous, inspired flow.

I leave the house, that’s the first thing! I play tennis, walk the dog, read (of course). I love doing things with my daughter, but at fifteen, she’s very selective about what she wants to do with me. We watch a lot of TV. We just watched eleven seasons of The Big Bang Theory back to back. That’s over 250 episodes and by the end I was still unable to remember all the words to the theme tune. That’s how relaxed I am as a viewer.

Madame Bovary, one of my favourite books, but in the original French. My French isn’t great, so deciphering that would definitely take me to the end of my life.

Which book do you most want to see published? Answer: Roger Federer’s memoir. He’ll write candidly and elegantly, of course. He is President of the World as far as I’m concerned and the day some horrible scandal breaks about him is the day I give up on mankind. 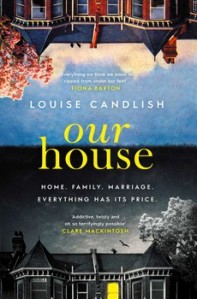 FOR BETTER, FOR WORSE.
When Fi Lawson arrives home to find strangers moving into her house, she is plunged into terror and confusion. She and her husband Bram have owned their home on Trinity Avenue for years and have no intention of selling. How can this other family possibly think the house is theirs? And why has Bram disappeared when she needs him most?

FOR RICHER, FOR POORER.
Bram has made a catastrophic mistake and now he is paying. Unable to see his wife, his children or his home, he has nothing left but to settle scores. As the nightmare takes grip, both Bram and Fi try to make sense of the events that led to a devastating crime. What has he hidden from her – and what has she hidden from him? And will either survive the chilling truth – that there are far worse things you can lose than your house?

TILL DEATH US DO PART.

Louise Candlish is the author of eleven previous novels, including The Sudden Departure of the Frasers, The Swimming Pool and the international bestseller Since I Don’t Have You. Louise studied English at University College London and worked as an advertising copywriter and art book editor before writing fiction. She lives in South London with her husband and teenage daughter.