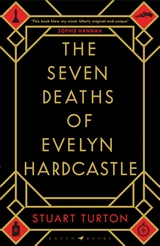 ‘Somebody’s going to be murdered at the ball tonight. It won’t appear to be a murder and so the murderer won’t be caught. Rectify that injustice and I’ll show you the way out.’

It is meant to be a celebration but it ends in tragedy. As fireworks explode overhead, Evelyn Hardcastle, the young and beautiful daughter of the house, is killed.

But Evelyn will not die just once. Until Aiden – one of the guests summoned to Blackheath for the party – can solve her murder, the day will repeat itself, over and over again. Every time ending with the fateful pistol shot.

The only way to break this cycle is to identify the killer. But each time the day begins again, Aiden wakes in the body of a different guest. And someone is determined to prevent him ever escaping Blackheath…

Evelyn Hardcastle is going  to die seven times. And it’s up to Aiden Bishop to prevent her death. Aiden finds himself waking up in the body of one the guests at Blackheath. Then he finds out he’ll wake up in seven more bodies. He has to relive the day of Evelyn’s death, until he can find out who is intent on murdering her.

This is definitely a book that will divide readers. There will be some who find the book is not for them, with too much repetition perhaps, or things not quite making enough sense for them. Then there will be those who get lost in the story and throughly enjoy it.

I’m in the latter camp. I loved this story from the beginning. I was lost in the pages, enveloped in the madcap, wild, nonsensical world of Blackheath. To me it made sense that Aiden could remember things from his other days, that he could flit back and forth. And if it didn’t quite make sense I just let it wash over me and not worry about it.

I loved the way the each character added layers to the story. We saw the narrative repeat but with a slight alteration as Aiden visited each of his hosts, the days changing  almost imperceptibly as Aiden’s actions in a future host affected the present one.

The characters are all diverse, some likeable, others not so much. Aiden himself is not as clear-cut. And that is the point. We find out more about Aiden by his reaction to his hosts, rather than anything he can directly tell us, as he cannot remember his real self. We can see he is reckless, stubborn, kind, considerate, law-abiding but willing to break the rules as he encounters the true personality of each of his hosts, and fellow guests.

The ending didn’t have me totally surprised as I had guessed some things which were near enough to the actual denouement.

I buddy read this with three other people. We would get to a certain point in the story and discuss. It was fun to see everyone’s varying reactions to the novel, and it’s safe to say we didn’t always agree.

Don’t spend too much time worrying that the story isn’t making sense. Part of the joy of the book is that it doesn’t have to have too much logic to it. It’s a wonderful excuse for complete suspension of disbelief.

To me this book is fun. Fun, perplexing and engaging. It was a pleasure to read and I can imagine that Stuart Turton had fun writing it.