I’m part of a online community called Book Connectors where bloggers, reviewers and authors can discuss all things book related. During one of the threads there was mention of ‘quiet’ books, the ones that miss out on the big publicity push. It was agreed that it was such a shame that certain books weren’t as widely read, as the reading public were missing out on hidden gems. So that sparked a germ of an idea and I decided to do a series of posts highlight titles that myself and other bloggers and authors feel may have gone under the reader’s radar. (That was the working title for this series of posts and as inspiration hasn’t struck me with anything better, its the one I’m going with for now).

Today’s first book is suggested by Eva Dolan, who’s latest novel, This is How it Ends, was published by Bloomsbury Raven on 25 January 2018.

She has suggested Slammer by Alan Guthrie, published by Polygon .

Young prison officer Nicholas Glass is finding the stresses of the job increasingly hard to handle. Bullied and abused by inmates and colleagues alike, every day is getting longer than the one before. When a group of cons use outside help to threaten his wife and daughter, Glass agrees to help them out with a ‘favour’. But, as their threats escalate, and one favour leads to another, Glass grows ever closer to breaking point. And when glass breaks, it shatters…

Here’s what she has to say:

“Allan Guthrie is an author much admired by other authors and fans of the darkest noir, but I’d like to see his stuff reach a wider audience. I love the sheer uncompromising brutality of his work – physically and psychologically – and his prose should be an inspiration to anyone wanting to write noir or social realist crime fiction. It’s stripped bare and often poetic in its simplicity. Jump in at the deep end with Slammer or – actually it’s all deep end. And that’s why he’s so good.”

The second book is chosen by Karen Perry, pen name of authors Paul Perry and Karen Gillece, who’s latest novel, Can You Keep a Secret, was published by Penguin on 30 November 2017.

They have chosen The Magic Pudding by Norman Lindsay, orignially published in 1918. 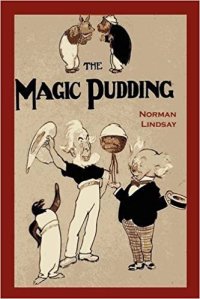 The Magic Pudding: Being The Adventures of Bunyip Bluegum and his Friends Bill Barnacle and Sam Sawnoff” is an Australian children’s book written and illustrated by Norman Lindsay. It is a comic fantasy, and a classic of Australian children’s literature. The story is set in Australia with humans mixing with anthropomorphic animals. It tells of a magic pudding which, no matter how often it is eaten, always reforms in order to be eaten again. It is owned by three companions who must defend it against Pudding Thieves who want it for themselves.

Here’s what she has to say:

“The book I’d like to suggest is a children’s book: The Magic Pudding by Norman Lindsay. It was my favourite book as a child by a long shot. It was sent to me when I was five or six by an aunt who was living in Australia. While the book may be well known down under, when I mention it to people on these shores, very few have heard of it, which is such a shame as it is the most brilliant book for kids, and indeed for adults. Funny, vivid, wicked, filled with a gloriously colourful cast of characters from the impeccably polite koala bear Bunyip Bluegum to the dastardly pudding thieves (a possum and a wombat), with a most irascible pudding at the centre of it all; there are songs and bawdy tales of adventure, along with the most wonderful illustrations (Lindsay was an artist first and foremost). My own children adore it. I recommend you get your hands on a copy – it’s a real treat!”

So there we have it, two more books that had passed me by. Have you read either of them? Do you have any quiet books you’d like to shout about?