Today I’m pleased to welcome Steph Broadribb to the blog. Steph is the author of Deep Down Dead and her latest novel, Deep Blue Trouble was published by Orenda Books on 5 January 2018.

Today Steph is talking about being a rookie bounty hunter. This is the second part, the first part can be found on Simon Leonard’s (@SimonJLeonard) blog here.

Bounty hunting is a dangerous profession. The voice of Lori Anderson, my single mom bounty hunter protagonist, came to me fully formed, but to make the story I wanted to tell sound authentic I knew I needed to find out more about her world. So one cold rainy November day I boarded a plane in London and took the sixteen-hour journey to Sacramento, California via LAX – determined find out what it took to become a bounty hunter. I hoped I was up to the challenge.

When you train to be a bounty hunter you learn only to wear concealed body armor when you’re out on a job – if your armor is obvious (over your clothes) then a bail jumper with a gun is far more likely to shoot you in the head. With concealed armor there’s a chance they’ll shoot you in the body and then you’ve more chance of survival. And a top tip from the expert bounty hunters is not to eat much before you go out to pick up fugitives – that way your stomach is empty in case you take a shot to the belly.

Once you’ve caught your fugitive you need to cuff them. Bounty hunters usually cuff people with their hands behind their backs for journeys of up to thirty minutes. If the travel time is longer than that, they’ll opt for full shackles by choice. One thing to remember though, if you Taser someone in the back, make sure you remove the Taser barbs when you cuff them – otherwise a flexible fugitive could extract a barb and use it to pick the handcuffs as you’re driving. Not good!

In the first book in the Lori Anderson series – DEEP DOWN DEAD – Lori has to pick up a fugitive from West Virginia and transport them back to face court in Florida. Lori’s alone, with just her daughter Dakota (for reasons that become clear in the book) but many bounty hunters opt to have a ‘second gun’ or driver for pick-ups they think could be trouble. To stay safe, the vehicles have prisoner partitions, and often cameras mounted inside the prisoner section recording footage that can be later used in court to show fair treatment of the fugitive and so the bounty hunter can keep an eye on what’s going on in the back without turning round. Basically, the rule of thumb is to take the quickest, safest, most direct route and be ready for anything, anytime. As readers of Deep Down Dead soon find out, things don’t always go easy!

In my latest book, the second in the series – DEEP BLUE TROUBLE – Lori is forced to team up with Dez McGregor and his team of San Diego-based bounty hunters. The differences in their ways of working soon cause friction and the resulting consequences are devastating. In a high-pressured environment, with a loaded gun pointed at her head, can Lori keep her cool and catch the fugitive? You’ll need to read the story to find out. 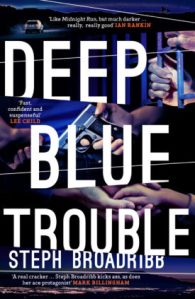 Single-mother Florida bounty hunter Lori Anderson’s got an ocean of trouble on her hands. Her daughter Dakota is safe, but her cancer is threatening a comeback, and Lori needs JT – Dakota’s daddy and the man who taught Lori everything – alive and kicking. Problem is, he’s behind bars, and heading for death row. Desperate to save him, Lori does a deal, taking on off-the-books job from shady FBI agent Alex Monroe. Bring back on-the-run felon, Gibson ‘The Fish’ Fletcher, and JT walks free. Following Fletcher from Florida to California, Lori teams up with local bounty hunter Dez McGregor and his team. But Dez works very differently to Lori, and the tension between them threatens to put the whole job in danger. With Monroe pressuring Lori for results, the clock ticking on JT’s life, and nothing about the Fletcher case adding up, Lori’s hitting walls at every turn. But this is one job she’s got to get right, or she’ll lose everything… Breathlessly paced, and bursting with high-voltage action and edge-of-your- seat jeopardy, Deep Blue Trouble is the unmissable next instalment featuring one of the most memorable and fearless female characters in crime fiction.

Steph Broadribb was born in Birmingham and grew up in Buckinghamshire. Most of her working life has been spent between the UK and USA. As her alter ego – Crime Thriller Girl – she indulges her love of all things crime fiction by blogging at http://www.crimethrillergirl.com, where she interviews authors and reviews the latest releases. Steph is an alumni of the MA in Creative Writing (Crime Fiction) at City University London, and she trained as a bounty hunter in California. She lives in Buckinghamshire surrounded by horses, cows and chickens. Her debut thriller, Deep Down Dead, was shortlisted for the Dead Good Reader Awards in two categories, and hit number one on the UK and AU kindle charts.