Today I’m pleased to welcome Matt Wesolowski to the blog. Matt is the author of Six Stories and his latest novel, Hydra, was published by Orenda Books on 15 January 2018.

Today Matt is talking about podcasts, which he uses as a narrative technique in his novels.

True Crime podcasting is in a golden era; more and more are rising up every day, swelling the ranks of the genre. This is no bad thing, there are now distinct sub-genres within the genre itself. I am no expert by any means, but these are the loose sub-genres that I’m currently seeing:

There’s the investigative documentary style with a narrator and interviews (The same style I used for Six Stories – Serial, Someone Knows Something, Dirty John and many more…).

Informed discussions with experts such as Real Crime Profile and Good Case Bad Case. These tend to be more analytical, drawing on experience and informed opinion.

Then there’s the less formal discussions; rather than experts giving their views on the science and psychology of cases, instead it’s true crime enthusiasts almost allowing the listener to be parley to their chat (Pioneered by the excellent ‘My Favourite Murder’).

Then there’s the single podcasters simply telling the story of the case (Casefile, They Walk Among Us)

There’s probably a great deal more, I’m finding myself lagging behind, unable to keep up with the volume of podcasts out there.

So what I’ll do is let you into four podcasts I’m currently enjoying (I did a similar blog post to this a few months back and what I’m listening to has changed completely!) I’ll pick one from each of the loose sub-genres.

This is an investigative podcast, similar to Serial and its ilk. Up and Vanished is presented by documentary filmmaker Payne Lindsay who investigates the disappearance of Georgia high school teacher Tara Grinsead, interviewing those who knew her and digging up old evidence. So far I’ve only listened to the first couple of episodes but it’s hooked me in.

I think this might be one of my favourite podcasts of all time. Simply described as ‘True crime tales from the underbelly of the land down under’ – it is a one-man operation recorded by an anonymous Aussie presenter (in a mask!). I have a great love for Australian true crime – there’s something much more stark and brutal about it. This podcast with its eerie music and sleek, enigmatic presenter creates a wonderfully immersive listen. The presenter recently recorded a video AMA with many requests from listeners to show his face…he didn’t!

An informal discussion about heinous murder plus a beer review, set in the quiet end of a fictional bar. There’s not a lot to dislike about the wonderfully approachable presenters, husband and wife team Dick and Jill. This podcast is well-researched and comprehensive in its portrayal of the cases it covers. There’s something endearing about these two chuckling and swapping their opinions on beer as well as true crime.

I’m a newcomer to this one and currently binging its back catalogue. This podcast is presented by Jim Clemente (former FBI profiler), Laura Richards (criminal behavioural analyst, former New Scotland Yard) and Lisa Zambetti (Casting director for CBS’ Criminal Minds). This definitely falls into the ‘expert discussion’ category as the hosts profile behaviour of perpetrators. What I like about it is that as well as looking at cases, it also looks back at other podcasts such as Dirty John and crime-themed media such as 13 Reasons Why.

I want to mention a few other podcasts I enjoy which have little or nothing to do with true crime. I’ve been fascinated with the paranormal my whole life, so I really enjoy the ‘Lore’ podcast which explores the history of folklore. There’s ‘Mysteries Abound’, a magazine-style show hosted by Paul Rex, describing vignettes of weirdness from around the world. Finally, I really enjoy the Mental Illness Happy Hour where American comedian Paul Gil Martin discusses struggles with negative thinking and mental health issues with different guests.

Which one is true?

One cold November night in 2014, in a small town in the northwest of England, 21-year-old Arla Macleod bludgeoned her mother, stepfather and younger sister to death with a hammer, in an unprovoked attack known as the Macleod Massacre. Now incarcerated at a medium-security mental-health institution, Arla will speak to no one but Scott King, an investigative journalist, whose Six Stories podcasts have become an internet sensation.

King finds himself immersed in an increasingly complex case, interviewing five key witnesses and Arla herself, as he questions whether Arla’s responsibility for the massacre was as diminished as her legal team made out.

As he unpicks the stories, he finds himself thrust into a world of deadly forbidden ‘games’, online trolls, and the mysterious black-eyed kids, whose presence seems to extend far beyond the delusions of a murderess…

Dark, chilling and gripping, Hydra is both a classic murder mystery and an up-to-the-minute, startling thriller that shines light in places you may never, ever want to see again. 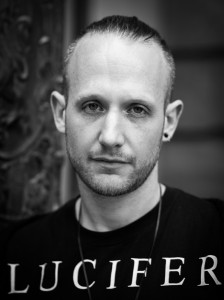 Matt Wesolowski is an author from Newcastle-Upon-Tyne in the UK. He is an English tutor and leads Cuckoo Young Writers creative writing workshops for young people in association with New Writing North. Matt started his writing career in horror and his short horror fiction has been published in Ethereal Tales magazine, Midnight Movie Creature Feature anthology, 22 More Quick Shivers anthology and many more. His debut novella The Black Land, a horror set on the Northumberland coast, was published in. Matt was a winner of the Pitch Perfect competition at Bloody Scotland Crime Writing Festival in 2015. His debut thriller Six Stories was an Amazon bestseller in the USA, Canada, UK and Australia.