Today I’m pleased to welcome Fay Keenan to the blog. Fay is the author of The Second Chance Tea Shop and her latest novel, Springtime at the Cider Kitchen was published by Aria Fiction in ebook format on 1 January 2018.

Kay has written this guest post to introduce us to her novel.

I can’t tell you how excited I am to be introducing Springtime at the Cider Kitchen to you today. The second book in the Little Somerby series, it’s been an absolute joy to write. Returning to the village to create another story has been like coming home. But how did it come about? Allow me to explain…

When I’d finished writing my debut novel, The Second Chance Tea Shop, I already knew there was another story to be told. Although ‘Tea Shop’ finished with all the loose ends tied up, there was one character who just wouldn’t leave me alone; who kept whispering in my ear that, hey, his older brother had been given a chance to take centre stage, why couldn’t he? Those of you who have read ‘Tea Shop’ will already know that the irresistible Jonathan Carter, the cider making ‘spare’ to Matthew Carter’s ‘heir’ is too gorgeous to ignore, so how could I refuse him?!

I also already knew exactly who the female lead character was. In the back of my mind while I was writing ‘Tea Shop’, she’d always been there. Although she was cut from the first novel, she lived on in my head. Caroline Hemingway, Anna’s former sister in law and sister to Anna’s first husband James, was the woman I wanted to be the focus of book 2. An events organiser based in Surrey, she craves a change of scene. When she comes to Little Somerby to attend Anna and Matthew’s wedding, Jonathan makes her a career offer she can’t refuse – and she makes quite an impression on him, too!

One of the things I loved about writing this novel was being able to imagine what it would be like to take on a project like The Cider Kitchen. Caroline is drafted in to manage the final stages of the renovation of a glorious old barn, and then run the restaurant for a year, under the watchful eye of Jonathan, who is trying to prove to older brother Matthew that he’s capable of more responsibility. As the spring bursts into full West Country bloom and the restaurant opens, Caroline must put all of her hospitality experience and expertise into practise to make The Cider Kitchen a success. This, inevitably, comes with its own set of challenges, as well as moments of genuine triumph as she heads up an innovative and enthusiastic restaurant team. Add a shadowy figure from Caroline’s past into the mix, who is intent on derailing this project of a lifetime, and suddenly there’s a risk that Caroline’s new life could career out of control like a speeding locomotive down the old Somerset Strawberry Line. Will Caroline overcome the obstacles and make The Cider Kitchen a success, and what of Jonathan? Can they work together or will their increasing attraction to one another get in the way of their ‘business not pleasure’ relationship?

Of course, there’s also the opportunity to catch up with some of the other characters from the first novel, and I hope that readers will enjoy experiencing what Matthew, Anna, Meredith, Ellie and the other cast members have been up to since the end of The Second Chance Tea Shop. Part of the fun of writing a follow up has been imagining where they all are as a new spring dawns in Little Somerby. For me, it felt like meeting old friends, and I hope readers will feel the same.

I hope that readers new to Little Somerby will enjoy this novel, and that those who loved the first book will help themselves to this next slice of Somerset life. Once again, I’ve had so much fun writing about the village of Little Somerby, and I hope it’s as much fun as a reader to visit! 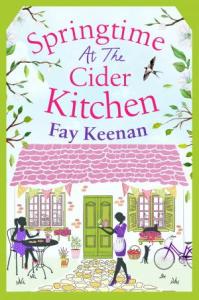 Caroline Hemingway can’t help but feel a little strange watching her ex sister-in-law marrying the owner of Carter’s Cider Farm, but she’s delighted Anna’s found happiness after the death of her late husband, and Caroline’s brother, James. If only Caroline could find her own love story…

Desperate to escape the rat race, Caroline decides to take the plunge and move to the idyllic village of Little Somerby, where she is given the task of opening and running a restaurant in one of the forgotten barns on the Cider Farm.

Opening and running The Cider Kitchen is no easy task, and there are many challenges on the way, but slowly Caroline feels she’s being accepted into the local community, and starts to believe she may have found her forever home. But secrets from her past seem destined to haunt her, and not even the attentions of the very dishy Jonathan Carter can distract her from all she’s left behind… 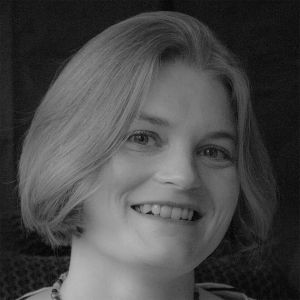 Fay Keenan was born in Surrey and raised in Hampshire, before finally settling back in the West Country. When Fay is not chasing her children around or writing, she teaches English at a local secondary school. She lives with her husband of fourteen years, two daughters, a cat, two chickens and a Weimaraner called Bertie in a village in Somerset, which may or may not have provided the inspiration for Little Somerby.