Today I’m pleased to welcome Eva Dolan to the blog. Eva is the author of Long Way Home, Tell No Tales, After You Die and Watch Her Disappear, featuring Dectives Ziguc and Ferreira . Her latest novel, This Is How It Ends, is published by Bloomsbury Raven on 25 January 2018.

Eva kindly answered a few of my questions.

This Is How It Ends is my first standalone thriller after four books in the Zigic and Ferreira series. It begins with seasoned activist and all round fierce bitch Molly helping her protégé Ella to hide a dead body down the lift shaft in a near abandoned block of flats on the banks of Thames which is being slowly cleared by developers who want to replace it with luxury apartments.

It’s a book about female friendship and how far you’d go to protect someone you care about and whether it’s ever possible to know someone well enough to risk your liberty for them. Playing out against a back drop of social cleansing in London, intergenerational conflict, the thrill and dangers of political activism and what happens when the people try to fight major business interests.

It shares a lot of the concerns of the Hate Crimes series but I wanted to see how they’d play out on a broader canvas like London, where the stakes feel higher and big P politics comes in play.

Gentrification and grassroots political activism are both subjects I’ve wanted to write about since the second Zigic and Ferreira book, and I’ve just been waiting for the opportunity to tackle them. When my editor, Alison Hennessey, moved to Bloomsbury to set up the new Raven imprint it felt like the perfect time to write this book.

We’re living through terrible, fascinating times politically and I wanted to write something which would engage directly with the problems of trying to work in London when you can’t afford to live there, the rise of political protest, especially among the young who are bearing the brunt of zero hours contracts and crazy rent hikes. But, as much as anything, I wanted to write a story from the other side of the law. My own sympathies lie with the protestors rather than the law in this case and I really wanted to explore their world.

3.     Are you a plan, plan, plan writer or do you sit down and see where the words take you? How long does the process take you from first line to completed novel?

I’ve been both. Pantsing is definitely the sexy, devil-may-care way to write a novel, working entirely on gut and subconscious.

But when you’re writing one book per year, which is really first draft in three or four months, the stress of pantsing is a bit too much for me. So now I plot out pretty much everything.

It was especially important with This Is How It Ends as the timeline splits at the point of the murder, with one character’s story running on forwards and the other unspooling backwards from that night. I needed their chapters to share points of reference if the structure was going to work, to touch in interesting little ways, a question asked on one strand being answered or reframed in the other – for that to work I needed to do major planning.

The book I’m working on at the moment has a twenty page chapter by chapter outline and it’s a pleasure to work from. The right amount of guidance as I go through it, but still leaving space for spontaneity and unexpected moments.

4.     Is there still anything that surprises you about the creative process of writing a novel?

This is How It Ends will be my fifth published book but the eighteenth I’ve written and the process still amazes me. It’s scary every single time. I think that’s what I find most surprising. Line by line, paragraph by paragraph, the writing has always felt natural and easy and I rarely find myself stumbling over it. But taking that germ of an idea and turning it into a whole book is always a total nightmare. I go to the bottom of the well every single time and it seems deeper every time. But I truly feel this is the best book I’ve written, so the suffering is worth it.

5.     This Is How It Ends is a standalone novel. You also write a series that features DI Zigic and DS Ferreira, officers in the Hate Crimes Unit. What are the benefits and downsides of writing a standalone compared with a novel that is part of a series?

I’ve enjoyed writing This Is How It Ends much more than any of the Zigic and Ferreira novels and I think that’s down to the sense of freedom you get with a standalone. Even with an outline! When you start a series novel, especially a detective novel, you know the rules you have to play to. And after four of them I was beginning to feel a bit trapped inside the structure of Zigic and Ferreira’s world.

So having the freedom to come at a murder from the other side was fabulous. The only downside is a standalone is a standalone and as much as I loved writing these characters and their world the new book is going to be very different again. I would have quite liked to bring a few of the minor characters over into it, but they just won’t fit. Maybe somewhere down the line I’ll find another story for Molly and Ella.

At the moment, with the new book to finish and This Is How It Ends to promote, I don’t feel like I’m ever not writing! Which makes getting away from it even more necessary. I do forty minutes yoga every day – essential for preventing the wide array of problems writers which afflict authors, from shoulder pain to saggy bum – then run or cycle four or five times a week. That tends to be when I do the thinking part of writing and even though it often feels like time I should be spending at my desk I think it’s really important to take care of your body in this job.

I then go and undo all this good work by baking as often as I can – macarons a speciality! – and being a connoisseur of fine sipping rums. That sounds better than ‘I drink too much to relax,’ doesn’t it?

7.     If you could only read one book for the rest of your life which book would it be?

It would have to be something fairly substantial, so I’d probably cheat and go for the complete works of Shakespeare. After chatting recently to one my most admired crime writers, Stav Sherez, about his own re-reading of them and discovering that a lot of the ones I missed out are exactly those I’d love I’ve decided to add them to my reading for 2018.

8.     I like to end my Q&A’s with the same question so here we go. During all the Q&As and interviews you’ve done what question have you not been asked that you wish had been asked – and what’s the answer?

I feel like I talk about my work and process and all that more than enough. So maybe what my goto macaron recipe is? It’s Mary Berry’s. Simple and perfect every time. 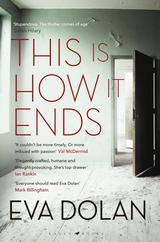 This is how it begins.

With a near-empty building, the inhabitants forced out of their homes by property developers.

With a body hidden in a lift shaft.

But how will it end?