Today I’m pleased to welcome Amy Lloyd to the blog. Amy’s debut novel, The Innocent Wife, was published by Century on 28 December 2017.

Amy kindly answered a few of my questions.

1. Tell us a little about The Innocent Wife.

The Innocent Wife is about a British woman named Samantha who falls in love with a man on Death Row in Florida – Dennis – who she believes is innocent. Soon after flying halfway around the world to meet him she marries him. While she is in Florida helping to film a new documentary series about his case evidence comes to light that sees him released from prison.

Suddenly the realities of her situation start to sink in as she finds herself alone in a strange place, married to a man she’s so longer sure she should trust.

I love true crime. Over the years I’ve seen true crime evolve from books about serial killers that look at the gory details of crimes and the psychology of murderers, into something else. Now true crime is primarily interested in examining cases of injustice, looking back at evidence and trials and asking whether the right person has been convicted. Serial, West of Memphis and Making a Murderer all approach their subjects in this way.

Internet communities and social media invite us to participate in these documentaries and many people become amateur sleuths or passionate advocates for the convicted. It was this reaction that interested me the most. I couldn’t help thinking it would be a much better story if it turned out that we had all backed the wrong horse, that a trial by media resulted in the exoneration of someone who might not be as innocent as we thought they were.

Sometimes I know where I’m going and I will write plans for the next few chapters. That’s a lovely, comforting feeling, looking at those plans and knowing where I’m going but it can change quite suddenly. As I write a new idea might come from nowhere and it derails my plans in an exciting way and I find that I’m writing without really having to think ahead, it just feels really natural.

On the other hand there are times when I feel like I have no idea what’s coming next and it’s horrible! It feels very scary, like walking blindfolded towards a precipice and not knowing when you’ll fall. In these times I try to tell myself it just doesn’t matter, I need to write until I find my way back and that if it all gets cut later it doesn’t matter. At worst I’ll have written a bunch of rubbish that gets cut and pasted into a file I keep on my desktop (this is to stop myself feeling like I’ve actually deleted it because to delete thousands of words is too painful! I have to trick myself into thinking they’ll come in useful one day). Best case scenario is that along the way, in amongst all that rubbish I wrote, I learned something new about one of my characters that I wouldn’t have known otherwise. There might be one tiny fragment of story in there to build from but you sometimes have to write a lot of bad stuff to get that.

I was surprised that I could do it. Until I actually wrote the final words of the first draft of my novel I didn’t really believe it was possible. So that was the first thing that shocked the hell out of me: I wrote a whole book! So it is possible!

I also thought I was pretty good at taking criticism until I had to hand over my book to be edited. That was an unpleasant surprise. Why didn’t anyone warn me that I was actually a gigantic crybaby? I think the problem was that I’d never worked so hard on something before or cared about anything quite so much. After the initial shock I began to toughen up but it is hard and it’s impossible to prepare yourself mentally for it. Now that the book is out there I feel very exposed and weird about it but I’m much stronger than I was when I handed in that first draft, thank god.

I love reading but I find it hard to concentrate on reading when I’m deep into writing. I find my mind wanders back to my own book over and over again. So I like to walk and listen to music to try and calm myself down.

I love Jillian Michaels workouts! I feel like that’s my half an hour a day where I don’t think about writing AT ALL. It’s beautiful and guilt free.

I go to the cinema at least once a week, too, and usually that completely takes my mind off my own book for a while. Bliss.

I think it would be Cat Marnell’s memoir How to Murder Your Life, on audiobook if possible. I’ve listened to it three times this year. I’ve completely fallen in love with it!

‘What’s your favourite part of The Innocent Wife?’ – I am really proud of the scenes where Dennis doesn’t understand the concept of white privilege and when he has these moments where we see how much has changed while he’s been away. In many ways he’s like a time traveler, he’s completely out of touch and it’s both funny and sad to see him struggle with ideas he’s not equipped to understand. 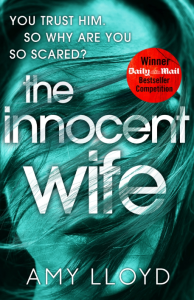 Twenty years ago, Dennis Danson was arrested and imprisoned for the brutal murder of a young girl in Florida’s Red River County. Now he’s the subject of a true-crime documentary that’s whipping up a frenzy online to uncover the truth and free a man who has been wrongly convicted.

A thousand miles away in England, Samantha is obsessed with Dennis’s case. She exchanges letters with him, and is quickly won over by his apparent charm and kindness to her. Soon she has left her old life behind to marry him and campaign for his release.

But when the campaign is successful and Dennis is freed, Sam begins to discover new details that suggest he may not be quite so innocent after all …

But how do you confront your husband when you don’t want to know the truth?

Amy Lloyd studied English and Creative Writing at Cardiff Metropolitan University. Her writing combines her fascination with true crime and her passion for fiction. In 2016 she won the Daily Mail Bestseller Competition for her novel The Innocent Wife. Amy lives in Cardiff with her partner, who is also a published novelist.