Today I’m pleased to welcome Shawn Reilly Simmons to the blog. Shawn is the author of five novels in her Red Carpet Catering Mystery series including Murder on a Silver Platter and Murder on the Half Shell . She is one of the authors to feature on the CWA Anthology of Short Stories: Mystery Tour, published by Orenda Books on 15 November 2017.

Shawn kindly wrote a post about writing both short stories and novels.

Novels to Short Stories and Back Again

One of the biggest surprises of my writing career over the past two years is the number of short stories I’ve written that have gone on to be published in various anthologies. I did not set out with this as a goal, but before the year is done I’ll have nine in print. My dream was to be a novelist, which I’m happy to say I am, but in addition to that, I’ve turned out to be an accidental writer of short mysteries.

I wrote my first short fiction piece around the age of seven. It’s a less-than-gripping tale about a dinosaur egg that hatches at a family party, in which every member of my (quite large) family has a speaking part. In later years my writing improved and by the time I graduated high school, I was named the best creative writer in my class. I have the plaque somewhere in the attic; the grant money I put towards my tuition.

While attending the University of Maryland my sophomore year, my creative writing professor kept me after class one day for a private chat. She encouraged me to write additional stories, besides the ones she’d assigned for the course. She also believed I was ready at the tender age of 19 to begin a writing a novel. I’ve never forgotten that conversation, or the encouragement I felt in that moment. At the time, I was a full time student working two jobs to make my way through, spending afternoons at an office in Washington D.C. and evenings at a busy restaurant until the wee hours after closing time. I didn’t get much extracurricular writing done back then, but I did earn an English Lit degree. I tucked it in my suitcase and moved to New York City after graduation, enchanted with the notion of pursuing a writing career, starving alongside all the other artists and writers.

Turns out starving isn’t fun. I landed a well-paying job in marketing for a company that offered travel as a perk. The dream career of writing was always at the back of my mind, but I didn’t circle around to it again until a decade later, after I’d spent my twenties and early thirties enjoying life in the city and seeing a little more of the world.

The first short story I wrote since that conversation with my professor was completed over a few days and sent off to a blind submission panel of judges for a mystery anthology. I’d had a spark of an idea and wrote it on a whim, with no expectations attached to the resulting story. I hit send and put it out of my mind, getting back to work at racing toward my novel deadline. A few weeks later I was thrilled when I got word my story had been chosen, and that it had received high marks and nice comments from the judges. My interest in writing short mysteries was reignited, and I mapped out a few more in my mind, keeping my eye out for places to submit them.

I’ve just completed the final draft of the fifth novel in my culinary catering mystery series, and will begin work on the first draft of the sixth during the holidays. My publishing contract has been renewed for five more books, so I’ll be spending several more years with my series characters, for which I’m grateful. But in between I find writing short stories a place where I can explore different themes, create new characters and situations, and go a bit darker than my more traditional novels will allow.

Because writing short stories requires a different set of skills than longer form fiction, most notably being careful about word choice, avoiding unnecessary description, and prioritizing the economy of words, I feel going back and forth between novels and stories strengthens the writing of both in the end. I see it as a kind of cross-training exercise for the creative mind.

I finally took my professor’s advice and did some extra writing on the side that wasn’t required. And I’m extremely pleased with the result. 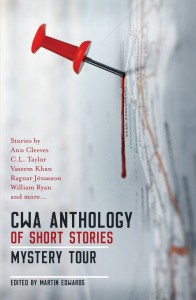 Crime spreads across the globe in this new collection of short stories from the Crime Writer’s Association, as a conspiracy of prominent crime authors take you on world mystery tour. Highlights of the trip include a treacherous cruise to French Polynesia, a horrifying trek in South Africa, a murderous train-ride across Ukraine and a vengeful killing in Mumbai. But back home in the UK, life isn’t so easy either. Dead bodies turn up on the backstreets of Glasgow, crime writers turn words into deeds at literary events, and Lady Luck seems to guide the fate of a Twickenham hood.

Showcasing the range, breadth and vitality of the contemporary crime-fiction genre, these twenty-eight chilling and unputdownable stories will take you on a trip you’ll never forget.

Shawn Reilly Simmons is the author of The Red Carpet Catering Mysteries featuring Penelope Sutherland, an on-set movie caterer, and of several short stories appearing in various anthologies. Her most recent, “The Prodigy” appears in the CWA anthology Mystery Tour, and “Burnt Orange,” appears in Passport to Murder: the 2017 Bouchercon Anthology. Shawn was born in Indiana, grew up in Florida, and began her professional career in New York City as a marketing executive after graduating from the University of Maryland with a BA in English. Since then Shawn has worked as a book store manager, fiction editor, convention organizer, wine rep, and movie set caterer. Cooking behind the scenes on movie sets perfectly combined two of her great loves, movies and food, and provides the inspiration for her series, published by Henery Press.

Shawn serves on the Board of Malice Domestic, is a member of Sisters in Crime, Mystery Writers of America, and the Crime Writers’ Association. She lives in Frederick, Maryland with her husband, son, and English bulldog. http://www.shawnreillysimmons.com