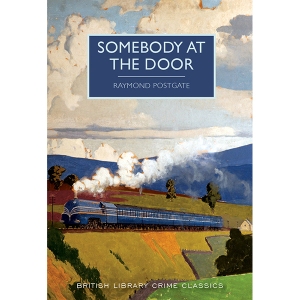 In the winter of 1942, England lies cold and dark in the wartime blackout. One bleak evening, Councillor Grayling steps off the 6.12 from Euston, carrying £120 in cash, and oblivious to the fate that awaits him in the snow-covered suburbs.

Inspector Holly draws up a list of Grayling’s fellow passengers: his distrusted employee Charles Evetts, the charming Hugh Rolandson, and an unknown refugee from Nazi Germany, among others. Inspector Holly will soon discover that each passenger harbours their own dark secrets, and that the councillor had more than one enemy among them.First published in 1943, Raymond Postgate’s wartime murder mystery combines thrilling detection with rich characters and a fascinating depiction of life on the home front.

It’s a cold January evening in 1942 and Councillor Henry Grayling steps off the evening train carrying £120. Hours later he is dead, and it’s down to Inspector Holly to establish a list of suspects. As he investigates it becomes apparent that many of fellow passengers on the 6.12 from Euston had their own reasons for wish Councillor Grayling dead.

The more I read of the British Library crime classics the more I get drawn into the wonderful echo of the past they provide. They are fascinating little glimpses into the way of living from a that few of us today would recognise. Somebody at the Door is no exception.

Set during the Second World War, the story is not just a murder mystery but also a look at how lives continued at home whilst the war was being fought overseas. There are scenes set during bombing raids, where conversations continue as bombs and bullets sound out in the night, where the response to such events is a mixture of relief at survival and an almost nonchalent acceptance that such events will occur.

The story is less a detective story but rather one of character analysis. The story progresses as if each suspect is being ticked off that list. As a suspect is highlighted his or her history is told as a story. There are few scenes of actual interaction between a suspect and Inspector Holly. Rather, each suspect is dealt with almost like a short story, tying them to Councillor Grayling in some teneous or more direct link, dependant upon the character. Some characters are more likeable than others. There are ones who the reader will hope to be the culprit, once their story has been read, others where the reader will hope they aren’t the guilty party.

There were some parts of the novel where I felt that the story wasn’t progressing as quickly as I would have liked, and that too much time was spent on the back story of a character. That said, I did enjoy the novel as I assessed or dismissed each suspect intent as I was on unmasking the killer before the big reveal.

British Library crime classics are great, atmospheric steps back in time, from the beautiful covers to the language contained in the pages and Somebody at the Door has both a beautiful cover and transportative language that takes you back to another age. There are just over 50 classics in the collection and I can’t wait to tick them all off my list.