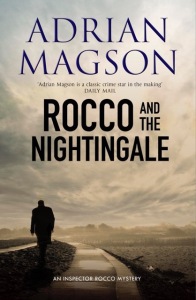 When a minor Paris criminal is found stabbed in the neck on a country lane in Picardie it looks like another case for Inspector Lucas Rocco. But instead he is called off to watch over a Gabonese government minister, hiding out in France following a coup. Meanwhile, Rocco discovers that there is a contract on his head taken out by an Algerian gang leader with a personal grudge against him.Against orders, he follows some leads on the original murder case, discovering as he does so that the threats against him are real. The minister he is protecting is kidnapped, and it soon becomes apparent that the murder, the threats and the minister’s kidnap are all interconnected…

Inspector Lucas Rocco has finally got used to the quiet way of life in Picardie, away from his work in Paris and the organised crime he used to combat. When a petty criminal is found murdered near his village, Rocco is surprised but believes the culprit will soon be caught. He’s soon taken off the case, much to his chagrin, in order to babysit a Gabonese minister. On top of all that he finds out someone has taken out a contract on his head. Now Rocco must protect the minister and track down the assassin, before the assassin finds Rocco…

This is the first book by Adrian Magson I have read and whilst Rocco and the Nightingale is the latest in a series it can easily be read without having read any of the other novels.

I loved the setting of the novel, both the location and the time period. It played like a black and white 60’s French movie in my head. I could image the countryside, the Citroens and mopeds driving through villages, the older village women, the cafes filled with men smoking and drink coffee and the young women with their sixties clothes and gamine hair cuts. Whilst there was violence in the story this seemed tempered by the time period. There was a more laid back atmosphere to the book, concentrated  more on old fashioned detective work and less on forensics, though these were touched upon.

All the characters were well drawn. Rocco was a likeable character, interesting to read. It was clear he had some history, history that now shaped his present, but he came across as a fair minded and fair handed man, someone who may not be afraid to bend the rules but would do so only for the right reasons. The relationship between Rocco and his colleagues was a pleasure to read and I could see how they could possibly develop in the future.

The crime itself is slightly different in that we know who has committed the murder and we hear from the assassin throughout the story. It is very much a cat and mouse tale but at some point the cat, unknowingly becomes the mouse.

I thoroughly enjoyed reading Rocco and the Nightingale.  Whilst I would like to read about a past Rocco, seen in Adrian Magson’s previous novels, I do hope that there will be the opportunity read more about present Rocco in the future.

To sit alongside my review Adrian Magson also kindly wrote this guest post about technology.

A lot of my writing is divided between contemporary spy thrillers and crime series. Spy novels have always been my favourites. But a few years ago I decided to try writing something set in the 1960s. I wanted to see if I could draw on my childhood experience in France at that time, and because I simply wanted to try something different.

The resulting creation was ‘Death on the Marais’ and Lucas Rocco, a police inspector who finds himself relocated out of Paris, where he’s been fighting gang crime, and dumped in Picardie, a rural patch of northern France, where ‘nothing ever happens’ – or so he thinks.

The first pleasure for me as a writer was forgetting about the technological world of contemporary spy fiction. No mobile phones, no computers or internet, and even radio communication was limited. Not that Rocco minds, as he has an in-built distrust of authority – especially of his boss, Commissaire Massin, with whom he has a difficult history – but also the all-powerful Ministry of the Interior, who have placed him where he is against his will.

Forensics, too, were at an early stage compared with now, so much of Rocco’s work, along with his colleagues, relies on leg-work and patient investigation, which brings him into contact with a wide variety of locals, good and bad.

Most of the Rocco series is character-led. Apart from Rocco there are colleagues such as rural policeman Claude Lamotte, Lamotte’s daughter and recent recruit, Alix, Detective René Desmoulins, Commissaire Massin and Captain Canet, and a stand-in pathologist, Dr Rizzotti. On the civilian side there’s his elderly neighbour Mme Denis, who takes him under her wing and acts as his eyes and ears in the community. And then there are his constant live-in companions, a family of fruit rats in his attic to keep him company. (We had them and delightful creatures they were – although not according to my mother. I thought they deserved a place in the books for old-time’s sake).

My stories aren’t ‘cosy’ and they have to have a backdrop. I like to use real events to hang them on, from echoes of WW2 and France’s war in Indochina, to Algerian independence, assassination attempts on the life of President de Gaulle, the rise of international criminality and even a kidnapping to derail French trade negotiations with China. It’s all grist to the moulin for a working writer.

In this latest book, ‘Rocco and the Nightingale’, Rocco is ordered by the Ministry to babysit a government minister on the run for his life from France’s former overseas territory of Gabon. Rocco suspects this is less to do with protecting the minister and more to do with France winning mining rights in that country. His real problem, however, arises when he learns that he himself is under threat, from a professional assassin named ‘Nightingale’, hired by a gangster bearing a serious grudge against him.

So much for nothing ever happens in Picardie. 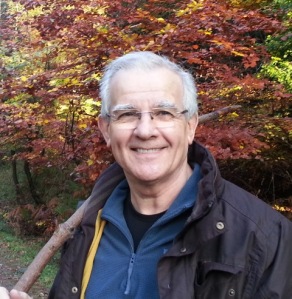 Hailed by the Daily Mail as “a classic crime star in the making”, Adrian Magson’s next book is Rocco and the Nightingale (The Dome Press – October 2017). This is the fifth in the Inspector Lucas Rocco series set in France in the 1960s.

Before this, Adrian had written 21 crime and spy thriller books built around Gavin & Palmer (investigative reporter Riley Gavin and ex-Military Policeman Frank Palmer) – “Gritty and fast-paced detecting of the traditional kind, with a welcome injection of realism” (The Guardian); Harry Tate, ex-soldier and MI5 officer – “fast-paced, with more twists and turns than a high-octane roller coaster” (New York Journal of Books); Inspector Lucas Rocco (crime series set in 1960s Picardie) – “Deserves to be ranked with the best” (Daily Mail), “Captures perfectly the rural atmosphere of France… a brilliant debut” (Books Monthly); Marc Portman (The Watchman) – prompting one reviewer to write: “the most explosive opening chapters I have read in a long time. Give this man a Bond script to play with!”; investigators Ruth Gonzales and Andy Vaslik – “Magson takes the suburban thriller overseas and gives it a good twist. [Readers] will happy get lost in the nightmare presented here” (Booklist Reviews).

Adrian also has hundreds of short stories and articles in national and international magazines to his name, plus a non-fiction work: Write On! – The Writer’s Help Book (Accent Press).

Adrian lives in the Forest of Dean and rumours that he is building a nuclear bunker are unfounded. It’s a bird table.