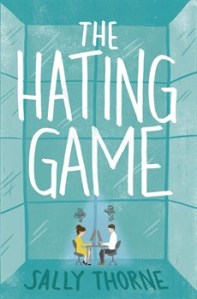 ‘I made a mistake when I first met Joshua: I smiled at him.

My best sunny smile with all my teeth, my eyes sparkling with stupid optimism. His eyes scanned me from the top of my head to the soles of my shoes. Then he looked away out the window. He did not smile back, and somehow I feel like he’s been carrying my smile around in his breast pocket ever since. He’s one up.’

Lucy Hutton, baker-of-cakes and usually a determined people-pleaser, has finally had enough. Ever since she met Joshua Templeman he’s been nothing but hostile. Over months in a shared office they’ve faced off against each other and now that a big promotion is up for grabs, it’s time to take him down.

But as the tension between Lucy and Joshua reaches its boiling point, it’s clear that the real battle has only just begun . . .

Lucy doesn’t like Joshua. Joshua doesn’t like Lucy. Whilst she is nice to everyone, except him, he appears nice to no one. The trouble is they both work in the same office. Across from each other. So the work days are spent playing games, the staring game, the HR game and the hating game. One day things take a turn. A new job has been announced and both Lucy and Joshua are candidates. Lucy has to either win the game or resign….

I picked this book up to take a quick look and I was soon caught up in the story. The writing style, humour from the outset and well drawn characters instantly appealed. I could tell that the book would be fun and it was. It’s the sign of a good book when the reader is sad that they have to say goodbye to the characters. Such was the case with The Hating Game.

Set in an unnamed city, and very much character based, the book is peppered with humour. I often found myself smiling and giggling throughout and often laughing out loud, or at least trying to contain those laughs whilst out in public. The banter between Lucy and Joshua is a pleasure to read.

The characters are all wonderfully portrayed, each one adding something to the story. Lucy is diminutive, a caring person with wild hair and the desire to make people like her. She is ultimately lonely, missing her parents, who also add witty scenes to the novel. Joshua is grumpy, tormenting and tactiturn and is fabulous to read. The reader is aware that there is more to the relationship between Lucy and Joshua than the characters would admit. As the story progresses it is highly entertaining to watch that relationship progress and alter.

Whilst it may be apparent to some how the story will end, for me it was not about the ending, it was about the journey there. I had immense fun reading The Hating Game. It is a book to just sit down with and enjoy.

Sally Thorne lives in Canberra, Australia and spends her days writing funding submissions and drafting contracts (yawn!) so it’s not surprising that after hours she climbs into colorful fictional worlds of her own creation. Sally believes that romance readers are always searching for intensity in their next favorite book – and it isn’t always so easy to find. The Hating Game is her first novel. (from Little Brown website)