I’m a little late joining in this month but to the starting of point in October is Like Water for Chocolate by Laura Esquivel. Described as a story that has moments of magic and wit, Like Water for Chocolate tells the tale of Tita who falls in love with Pedro. Only Tita has been forbidden to marry and must look after her mother. Pedro marries her sister to be closer to Tita and the story shows the life they all have together until tragedy strikes.

Perhaps not the obvious choice for the next book, but one that also has chocolate in the title and a hint of magic to it is Charlie and the Chocolate Factory by Roald Dahl. Love him or loathe him, Dahl had the knack for being able to spin a yarn that could enchant a child and Charlie and the Chocolate Factory is a fine example. Inspired by Dahl’s experiences as an unpaid chocolate tester for Cadbury whilst at boarding school, the tale of Charlie Bucket and his visit to the mysterious and wonderous world of Wonka is still loved by children today. In the latest film version the eponymous Wonka is played by Jonny Depp. 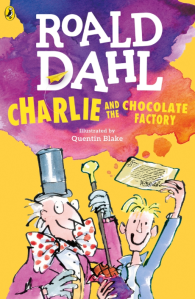 This moves quite handily to the next book, Chocolat by Joanne Harris. In the adaptation Jonny Depp plays Roux. Chocolat tells the tale of Viviene and her battle of wits with the bad tempered Father Reynaud and is set in French village of Lansquenet. (Yes I could have just gone straight to this but I wanted to include both Chocolat and Charlie Bucket.)

Also set in France is Let Me Tell You About a Man I Knew by Susan Fletcher. This wonderfully absorbing novel set in 1889 sees lonely warden’s wife Jeanne Trabuc befriend a new arrival at the sanatorium run by her husband in Provence. As she befriends the red-headed painter who’s room is filled with painting of stars, irises and sunflowers, she discovers more about herself than she could have ever imagined.

Tin Man by Sarah Winman opens with a painting, a copy of Van Gogh’s sunflowers. This short, moving tale follows Ellis as he comes to terms with his grief. We see how he met his wife and learn of his relationship with his best friend Michael. A story about grief, loss and love in all it’s forms.

The tin man was a major character in The Wizard of Oz and Wicked by Gregory McGuire is perhaps one of the most well known books inspired by the Emerald City. Turning the tale on it’s head Wicked tells the tale of Elphaba, who may or may not be quite the wicked witch of the west.

There you have it, from Mexico to Oz via a chocolate river and France. Have you read any of these? Where would your six degrees of separation take you?

You can follow Six Degrees of Separation Twitter with the hashtag #6Degrees or of course you can see the links over at Kate’s blog.